SETI implications of a possible Technology of Supraluminic Communications 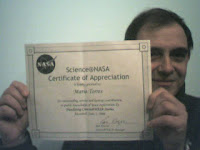 1) Let us suppose that such a technology allows communications practically instantaneous even at thousands of light years;

2) Let us suppose that such a technology will be developed by our scientists and egineers within two centuries;

3) Let us suppose that our nearest interstellar neighbor equipped with that technology is at 500 light years;

4) Let us suppose that such a civilization has its own SETI program having something similar  to our SKA (Square Kilometer Array) capable to detect radar pulses at a distance of 50,000 light years;

When they verify that our distance if of 500 light years they will not answer using electromagnetic signals.

Because their reply will take 500 years to reach us and they will be aware that 200 years after sending those pulses, we should already have developed that technology of “instantaneous” interstellar communications.

So, they would think that we have that technology since 300 years ago and they will try to contact us using it.

Note 1: If they have a technological level similar to ours when they receive the message, we would receive an answer within 700 years (the 500 that took to reach them our message plus the 200 years of the development their technology lacked of).

We would be communicating with a civilization that is very much behind us (many centuries).

Note 2: Another possibility would be that a civilization that has already such a technology were using it to send to us invitations periodically, which obviously we wouldn’t know about.

It is possible that such a civilization were sweeping its galactic neighborhood searching for contacts, as well as we are going to do some day when we lost our fear.