A LETTER TO OBAMA - AMERICAN UFOLOGISTS SAID: “NOT NOW” 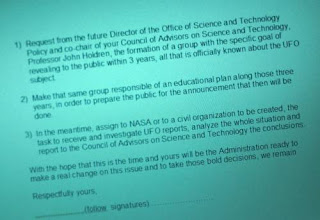 On December 21, 2008, I sent to a very restricted and selected list of American ufologists the draft of a letter to then President-Elect Barack Obama containing a simple but effective proposal of just three points.

The initiative taken pursued the goal to send the letter as soon as possible, with the signatures of all those who were invited to join the proposal.

Within 3 weeks I received the answers from all the people I have sent my proposal, exception made of two of them.

As a result of that, on January 10, 2009, I sent to the same people the following message:

You have spoken and I have listened.

You have said this is not the appropriate moment to raise the issue of a total disclosure about what the government knows on UFOs.

You have said President-Elect Obama will necessarily have to face more urgent and demanding issues like the economy and the international conflicts.

You have said that maybe certain discreet and personal contacts with people that is working in the Obama's transition team or later in his government could be more effective in terms of the goal we pursue.

OK. If someone of you are going to do something like that --I mean, getting in contact with people working very close to President Obama-- please let me know and tell me what are you planning to do or what specifically you are doing. Maybe I can help. I am living in the Washington DC area, a privilege few of you --if any-- has.

As a professional journalist I know quite well how to get in contact with people no matter their positions.

And if nothing happens within the next 9 months, and nobody is doing anything at all, then I will think that we have lost the opportunity at least to let our voices heard.

Time will tell us.

Thank you for your time to read my messages and your kindness to answer.

And please, count on me.

Sincerely,
Milton W. Hourcade  P.S.- Be it known that Mr. Richard Dolan was the only one that was ready to sign the letter I proposed to send to President-Elect Obama. Thank you Richard! - MWH
Posted by Milton at 2:13 PM