THE ARTICLE OF "MILITARY.COM" ABOUT THE LEGISLATIVE HEARING ON UAP 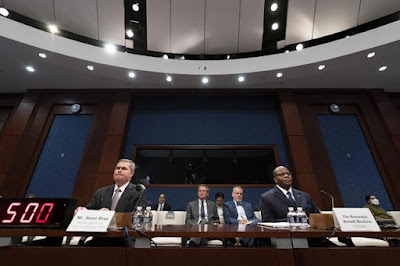 Deputy Director of Naval Intelligence Scott Bray, left, and Under Secretary of Defense for Intelligence and Security Ronald Moultrie speak during a hearing of the House Intelligence, Counterterrorism, Counterintelligence, and Counterproliferation Subcommittee hearing on "Unidentified Aerial Phenomena," on Capitol Hill, May 17, 2022, in Washington. (AP Photo/Alex Brandon)
Military.com | By Travis Tritten

That analysis of the video, which was widely publicized last year, was part of an update to Congress on Tuesday by military officials heading the Pentagon's new UFO identification program. The public House hearing was billed as the first on the phenomenon since the 1960s amid growing public interest over claims of troop encounters with unexplained craft.

But the testimony likely deflated any hopes for evidence of extraterrestrial visitors. Even intriguing videos such as the nighttime "triangles" can have simple earthly explanations, and most of the objects the Pentagon has yet to explain are unknown simply due to a lack of enough information, officials told the House Intelligence Committee panel.

"It's insufficient data; that's one of the challenges we have. Insufficient data either on the event itself, the object itself, or insufficient data or plug-in with some other organization or agency that may have had something in that space at that time," said Ronald Moultrie, the undersecretary of defense for intelligence and security, who currently leads the UFO program. "So, it's a data issue that we're facing in many of these instances."

UFO advocates backed by a bombshell New York Times story in 2017 have pointed to accounts from some Navy fighter pilots and a few grainy infrared military videos depicting unknown objects as evidence the Pentagon faces an intelligence failure on the scale of the Pearl Harbor or 9/11 attacks.

Congress is now turning up the heat on the department and its investigations as interest grows. Rep. Andre Carson, D-Ind., who is the chairman of the House panel, said the military needs to convince the public that it is now accepting of reported UFO sightings and that troops will be "treated as witnesses, not as kooks."

A total of 400 reported incidents are being investigated by the Pentagon's Airborne Object Identification and Management Synchronization Group, or AOIMSG. The group was created last year as Congress passed a law requiring a formal body in the Defense Department dedicated to probing what it calls unidentified aerial phenomenon and releasing regular reports.

Cases have ballooned from the 144 incidents from 2004 to 2021 cited in an initial public report last summer on the objects -- also ordered up by Congress -- by the Office of the Director of National Intelligence. That report arrived at a similar conclusion about the lack of data.

Still, the Pentagon says there so far is scant evidence backing any extraordinary explanations. During the hearing, lawmakers asked whether any of the objects was sending out unusual signals or apparent communications.

"We have detected no emanations ... that would suggest it's anything non-terrestrial in origin," said Scott Bray, deputy director of Naval Intelligence, who headed the task force that preceded the Pentagon's new UFO office.

Many of the new cases are actually older incidents that are just now being reported by military witnesses as the stigma of UFO sightings in the military eases, Bray said.

But that also means those older witness accounts can lack additional evidence such as sensor data -- information collected by the array of hardware used by the military to track and identify objects. That makes the job of investigation more difficult, he said.

The nighttime video of the triangle-shaped objects flying over the USS Russell was shot in 2019 in the Pacific and was leaked by UFO researchers last year who claimed it was among the best military UFO footage ever released. It was taken with a camera through a night-vision lens by the Navy crew.

Bray said the Pentagon found a second night-vision video shot elsewhere under similar circumstances and was then able to confirm the objects were drones that only appeared triangular due to the camera aperture, a common effect called bokeh.

Explanations can still be hard to come by when video evidence is available. Bray showed lawmakers what appeared to be a new UFO video not previously released to the public. The video was shot by a service member in the cockpit of a fighter jet and shows what appears to be a spherical-shaped object zip by the plane.

The object appears and disappears in a fraction of a second in the video. It moves so quickly that staff members at the hearing could not freeze the video at the right spot to show a still image of the object, despite repeated attempts.

"There's a lot of information like the video that we showed, in which there's simply too little data to create a reasonable explanation," Bray said. "There are a small handful of cases in which we have more data, that our analysis simply hasn't been able to fully pull together a picture of what happened."