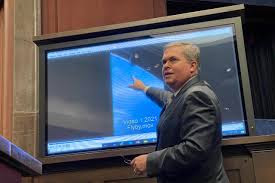 The Deputy Director of Naval Intelligence, Scott Bray showed lawmakers what appeared to be a new UFO video not previously released to the public. The video was shot by a service member in the cockpit of a fighter jet and shows what appears to be a spherical-shaped object zip by the plane. The object appears and disappears in a fraction of a second in the video. It moves so quickly that staff members at the hearing could not freeze the video at the right spot to show a still image of the object, despite repeated attempts.

"There's a lot of information like the video that we showed, in which there's simply too little data to create a reasonable explanation,"[taken from Military.com]

Well, today Commodore (R) Rubén Lianza, Director of the Center for Aero-Space Identification (CIAE) that belongs to the Argentinean Air Force identified and explained the object. 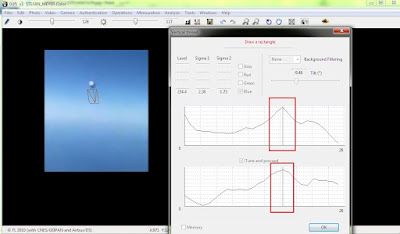 (from which it was filmed) that crossed. This is a frame capture from one of the videos that was shown at the UAP Hearing in the Capitol. It is clearly a helium balloon with the thread still hanging below it (solved using the IPACO software's "Vertical thread" tool). In this case, the Sigma peak was positive because the thread is brighter than the background.

We warmly congratulate our dear friend Rubén Lianza, and we think that the AOIMSG needs to buy the IPACO program to be able to resolve many cases.