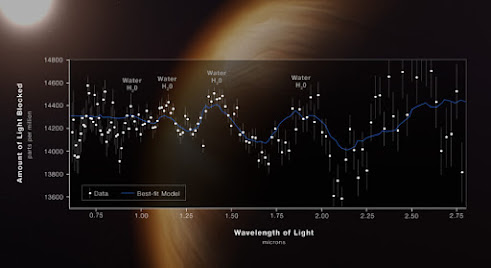 A transmission spectrum is made by comparing starlight filtered through a planet’s atmosphere as it moves across the star, to the unfiltered starlight detected when the planet is beside the star. Each of the 141 data points (white circles) on this graph represents the amount of a specific wavelength of light that is blocked by the planet and absorbed by its atmosphere.

Researchers are able to detect and measure the abundances of key gases in a planet’s atmosphere based on the absorption pattern – the locations and heights of peaks on the graph: each gas has a characteristic set of wavelengths that it absorbs. The temperature of the atmosphere can be calculated based in part on the height of the peaks: a hotter planet has taller peaks. Other characteristics, like the presence of haze and clouds, can be inferred based on the overall shape of different portions of the spectrum.

The gray lines extending above and below each data point are error bars that show the uncertainty of each measurement, or the reasonable range of actual possible values. For a single observation, the error on these measurements is remarkably small.

The blue line is a best-fit model that takes into account the data, the known properties of WASP-96 b and its star (e.g., size, mass, temperature), and assumed characteristics of the atmosphere. Researchers can vary the parameters in the model – changing unknown characteristics like cloud height in the atmosphere and abundances of various gases – to get a better fit and further understand what the atmosphere is really like. The difference between the best-fit model shown here and the data simply reflects the additional work to be done in analysing and interpreting the data and the planet.

WASP-96 b is a hot gas giant exoplanet that orbits a Sun-like star roughly 1,150 light years away, in the constellation Phoenix. The planet orbits extremely close to its star (less than 1/20th the distance between Earth and the Sun) and completes one orbit in less than 3½ Earth-days.

NIRISS was contributed by the Canadian Space Agency. The instrument was designed and built by Honeywell in collaboration with the Université de Montréal and the National Research Council Canada.

NASA scientists are preparing to paint the most detailed picture to date of the atmosphere of Venus when the aptly named DAVINCI — or Deep Atmosphere Venus Investigation of Noble Gases, Chemistry, and Imaging — mission drops a probe to the planet's surface. 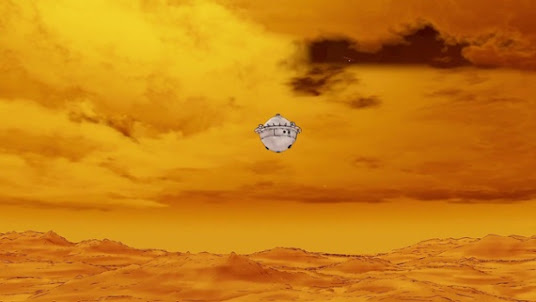 When the 3-foot-wide (0.9 meters) descent sphere of the DAVINCI mission takes its one-way parachute trip to Venus' surface in the early 2030s, it will be carrying the VASI (Venus Atmospheric Structure Investigation) instrument along with five other instruments. VASI will collect data regarding the temperature, pressure and winds of Venus' atmosphere as it makes its hellish descent and enters the planet's crushing lower atmosphere.

"There are actually some big puzzles about the deep atmosphere of Venus," Ralph Lorenz, the science lead for the VASI instrument and a planetary scientist at the Johns Hopkins Applied Physics Laboratory (APL) in Maryland, said in a statement. "We don't have all the pieces of that puzzle and DAVINCI will give us those pieces by measuring the composition at the same time as the pressure and temperature as we get near the surface."

Lufthansa Technik has converted a decommissioned Airbus A320 into a hydrogen field laboratory to test maintenance and ground-based processes in preparation for hydrogen-powered flight.

The project, which is being funded by Hamburg’s Ministry of Economic Affairs and development bank IFB Hamburg, is a partnership among Lufthansa Technik, Hamburg Airport, German aerospace center DLR and the ZAL Center for Applied Aeronautical Research.

Over the coming months, the Lufthansa aircraft, which was operated for 30 years as D-AIQF, is scheduled to be fitted with a series of hydrogen components, including test systems, an internal tank for liquid hydrogen (LH2) and an onboard fuel cell. These will be paired with supporting ground-based hydrogen infrastructure.

The research is expected to include studies of refueling times and processes; best practices to avoid overfilling and waste; prevention of ice build-up on components and surfaces; hydrogen gas leakage and recovery; safety and fire hazards; inerting of stored hydrogen; and training requirements for ground and maintenance personnel.

A digital twin of the A320 will also be created for use in simulating, developing and testing predictive maintenance methods for hydrogen-powered aircraft systems and components.

These preparations are expected to pave the way for the handling and maintenance of hydrogen-powered aircraft, which are anticipated to enter service in the middle of the next decade.

Excerpts of an article written by Victoria Moores for Aviation Week. We recommend the reading of AVIATION WEEK.

Introduction: As all we know --and we have announced in this web-page-- Dr. David Spergel is the Director of NASA's independent study on UAP.

Before he was selected by NASA, Dr. Spergel wrote his ideas about UFOs, what they could be and how to study them. Here we reproduce partially that document. 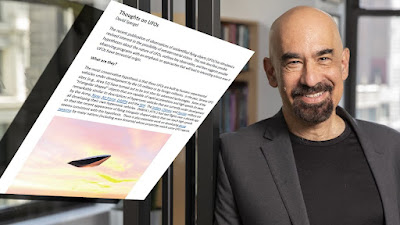 The recent publication of observations of unidentified flying objects (UFOs) has stimulated a revived interest in the possibility of extraterrestrial visitors. This note describes possible hypotheses about the nature of UFOs, outlines key observables, and then suggests possible observing programs with an emphasis on approaches that will lead to interesting science even if UFOs have terrestrial origin.

The most conservative hypothesis is that these UFOs are built by humans: experimental vehicles under development by the US military or by foreign militaries. In the past, famous UFO sites (e.g., Area 51) have turned out to be test sites for advanced technologies. Some of the “triangular shaped” objects that are capable of rapid accelerations and high speeds do seem remarkably similar to descriptions of hypersonic vehicles that are currently under development by the Army, Navy, Air Force, DARPA and the NSA. The Indian, Chinese and Russian military are all developing their own hypersonic vehicles. DARPA’s HTV-2 had test flights over a decade ago so that the recent appearance of flying triangular shaped objects that can reach high speeds seems consistent with this hypothesis. There is also extensive work on developing drone swarms by many nations (including even Armenia) whose properties match some UFO reports.

Another possible explanation for some of the events are natural phenomena such as Ball lightning or St. Elmo Fire. Plasma physicists and atmospheric physicists are still struggling to fully understand these phenomena. Recent work associates these events with lightning induced quasi-stable plasma effects (see e.g., Skyrmion origin of ball lightning). Some of the events could be optical illusions due to multiple reflections in airplane windows or atmosphericeffects.

The most exciting hypothesis is that some of the UFOs are extraterrestrials visiting the Earthand studying the planet and its life forms. Aliens capable of interstellar space travel are notlikely to be using technologies that are familiar to us (e.g., solar sails or hypersonic airbreathingvehicles). They would only be detectable if they wished to be seen. For example, they wouldlikely want to miniaturize their probes and not likely to have familiar-looking vehicles. Given astronomical timescales, alien life is likely either a billion years less advanced than human life or a billion years more advanced technologically. As Clarke’s third law states, “any sufficiently advanced technology is indistinguishable from magic”.