Exception made of the possible reports by sensationalistic press, the paragraphs contained in the NATIONAL DEFENSE AUTHORIZATION ACT FOR FISCAL YEAR 2023 passed on July 1st. 2022, manifests a clear concern about the lack of sufficient communication mainly to the intelligence community and intelligence organizations.

Following that concern the Act establishes a Joint Program Office to have a repository of UAP reports and to assure that they are shared interagency and with the intelligence community.

The law also introduces the concept of “transmedium” objects, meaning that they can operate in the space, in the air and under the water, and consequently the definition of UAP is expanded to “unidentified aerospace undersea phenomena”.

And that is all. 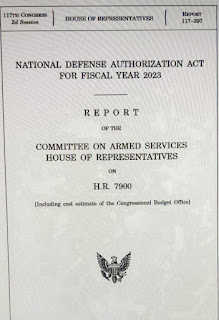 REPORT OF THE COMMITTEE ON ARMERD SERVICES HOUSE OF REPRESENATIVES ON H.R. 7900 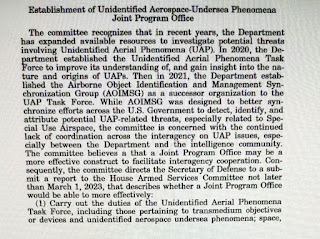 The committee recognizes that in recent years, the Department
has expanded available resources to investigate potential threats
involving Unidentified Aerial Phenomena (UAP). In 2020, the De-
partment established the Unidentified Aerial Phenomena Task
Force to improve its understanding of, and gain insight into the na-
ture and origins of UAPs. Then in 2021, the Department estab-
lished the Airborne Object Identification and Management Syn-
chronization Group (AOIMSG) as a successor organization to the
UAP Task Force. While AOIMSG was designed to better syn-
chronize efforts across the U.S. Government to detect, identify, and
attribute potential UAP-related threats, especially related to Spe-
cial Use Airspace, the committee is concerned with the continued
lack of coordination across the interagency on UAP issues, espe-
cially between the Department and the intelligence community.
The committee believes  that a Joint Program Office may be a
more effective construct to facilitate interagency cooperation. Con-
sequently, the committee directs the Secretary of Defense to  sub-
mit a report to the House Armed Services Committee not later
than March 1, 2023, that describes whether a Joint Program Office
would be able to more effectively:

(1) Carry out the duties of the Unidentified Aerial Phenomena
Task Force, including those pertaining to transmedium objectives
or devices and unidentified aerospace undersea phenomena; spaceatmospheric, and water domains; and currently unknown tech-nology and other domains;

(2) Develop procedures to synchronize and standardize the collec-
tion, reporting, and analysis of incidents, including adverse physio-
logical effects, regarding unidentified aerospace-undersea phe-
nomena across the Department of Defense and the intelligence
community, in consultation with the Director of National Inteligence;

(3) Develop processes and procedures to ensure that such inci-
dents from each component of the Department and each element of
the intelligence community are reported and incorporated in a cen-
tralized repository;

(4) Establish procedures to require the timely and consistent re-
porting of unidentified aerospace-undersea phenomena;

(6) Evaluate the threat that such incidents present to the United
States;

(8) Coordinate with allies and partners of the United States, as
appropriate, to better assess the nature and extent of unidentified
aerospace-undersea phenomena;

(9) Prepare reports for Congress, in both classified and unclassi-
fied form; and

(10) Ensure that appropriate elements of the intelligence commu-
nity receive all reports received by the Office regarding a tem-
porary nonattributed object or an object that is positively identified
as manmade, including by creating a procedure to ensure that the
Office refers such reports to an appropriate element of the intel-
ligence community for distribution among other relevant elements
of the intelligence community, in addition to the reports in the re-
pository described in 3