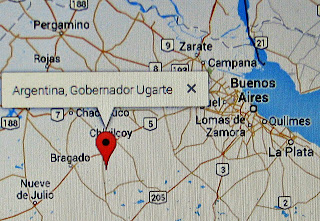 As it is well known, there are certain places over the World where the A.L.P. could be seen.

On July 20, 2008 an article about this issue was published in this blog under the title of: “COMPARATIVE STUDY OF "ANOMALOUS LUMINOUS PHENOMENA"

The Italian Astrophysicist Dr. Massimo Teodorani has tracked them in Hessdalen, Norway, but also in some places of the United States of America and in his own country.


On August 6, 2008, in this blog we published an explanation found by Dr. Teodorani for the vast majority of the phenomena happening in Hessdalen.  His criteria are applicable to the situation in Gobernador Ugarte because there are two coincident factors: the presence of a river and that the phenomena happen when there is cold weather.

Gobernador Ugarte is a little town in the Province of Buenos Aires, Argentina,.of 10  by 10 blocks of extension. 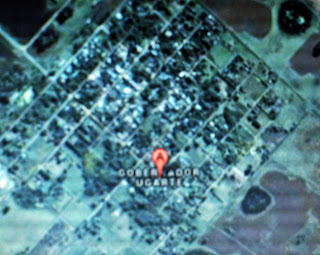 It has 547 inhabitants and is at 184 kilometers to the South West of the city of Buenos Aires.

Near the town is the Salado River.

The town is surrounded by fields where agricultural activities are developed.

There have been repeated reports from people of the area who have seen strange lights, even over the Salado River.

On June 21, 2013, from 3:35 AM to 4:10AM (local time) a team of four investigators went to the area with video cameras and instruments to verify the phenomena.

As we have said from this blog and in public lectures and books, this is the New Ufology which relies no more only in the stories told by witness but that makes the investigators to face the phenomena by themselves, and then record and measure it using cameras and a variety of instruments.

Here is the report written by Mr. Cristián Soldano, one of the members of the team who also publishes ORBITAL VISION on Facebook.

We thank Mr. Soldano for sharing his report with us. 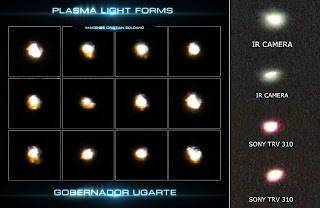 ORBITAL VISION includes a Plate of photographs which shows the recently recording in the area of Gobernador Ugarte/Buenos Aires, of a localized phenomenon that triggers recurrent observations, typified by luminous sources of apparent plasmatic condition, recorded this time by a team of investigators composed by Licentiate Gustavo Cía, Mr. Rubén Rombolá, Mr. Pablo Nobile and Mr. Cristián Soldano, using 3 video cameras of different characteristics and recording modes that simultaneously captured an initial group of 2 identical manifestations that suddenly appeared over a certain rural area, at a distance of approximately 33 feet among them, and at about 1,312 to 1,640 feet of the investigators team, evolving with a fixed rotation movement and randomly light lateral shifts without any determined cycle or frequency.

The luminous sources denoted great chromatic intensity variations, alternated with pulsating emissions without a stable cycle of sequence and at random with loss of intensity and drop of direct visual observation to the point of “disappearing” to regain intensity seconds later as well as a not pulsating luminous intermittency. 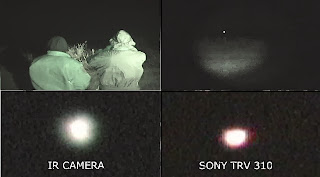 The use of an Ultra Low Frequency Meter pointing to the phenomenon did not determined significant readings. The same happened with the use of Magnetometers (K2). After many minutes of observation the team divided itself into two groups of two people each one: a Base team with Messrs Gustavo Cía and Rubén Rombolá, and a group of action and proximity to the phenomenon, with Messrs Pablo Nobile and Cristián Soldano. This second group approached the phenomenon at about 820 feet, when they noticed that just 1 luminous source remained because the other faded until it disappeared, but it reappeared at no identical lapses, took intensity and then fade down. When this group reached the maximum point of approach, both manifestations dropped out “instantaneously” and after some other minutes of expectation without any visual appearance Nobile and Soldano returned to the Base group, when after walking about 65 feet they were told by walkie-talkie that suddenly the luminous sources reappeared in number of 3 and forming an equilateral triangle but at a greater distance than the one established during the process of approximation (another 490 to 650 feet from the initial distance).

The whole sequence of events recorded with 3 video cameras (some of them of high optical quality) in different modes, shows luminous structures of very high level of strangeness, which are on agreement with the descriptions given by many local witnesses.
Such phenomenon happened on a clean area of the field, where there was any kind of thing or source that could be a stimulus or could activate its formation. The phenomenon happened between to isolated appearances over an area of the Salado River, determined individually by some of the investigators.  This kind of appearances which they presumed were at about 10 to 16 feet over the ground have been mentioned by different narratives of people living in the area and they correlate perfectly with similar luminous shapes seen globally in the same way.

Such luminous manifestations of apparent plasmatic structure have been observed recurrently in that area and the investigators have verified them on different opportunities, being specifically predominant during times of very low temperatures and over areas of the field that have not any particular features that could be associated with the phenomenon.

Various witnesses, some of them qualified ones, have told investigators about their observations and direct experiences with the phenomena that accordingly coincide with this kind of undetermined luminous sources that could be described in their morphology and phenomenologically as:

1-Radiant luminous sources of variable magnitude, generally of spherical shape with a white-amber nucleus and undefined edges of variable colors

3-They are visible and have times of invisibility. They turn on and off with fading times.

4-Occasionally they perform variable movements following the shape of the ground or going up with same or pulsating intensity up to 980 feet.

5-They appear suddenly and in their evolution they have picks of intensity when the luminosity of the nucleus is notoriously amplified reaching the point of incandescence.

6- They appear together at random including the formation of an equilateral triangle, showing the same configuration and evolutions.

7-Occasionally they have shown an interactive behavior related to luminous stimuli sent to those luminous sources by the working team, which included the repetition of complex luminous sequences.

8-The investigators have verified the appearance of this phenomenon over the Salado River, hovering over the water, but there are narratives of witnesses who have seen them emerge from the river and evolve over it

9- There are some luminous phenomena which so far we were not able to determine as associated with the ALP that could be described as non-radiant but compact light red spheres with an incandescent nucleus and defined edges, which present identical behavior that the ones previously described.

10-Most of the times when some members of the team had approached the lights they ceased to be visible, but returned to be visible and to regain luminous intensity as soon as the investigators had taken distance from them.

12- In some cases in which lights followed people EM effects has been associated with them on houses, vehicles or agricultural machinery

13- In repeated occasions humming or high-pitched sounds similar to electrical discharges have been reported.

14- In some places where these phenomena occur there are cycles of strong temperature variation and odors associated with the vegetation submitted to cycles of high temperature. People have tried to establish if those thermal emissions could be correlated with ionizing energy.

15- These technical notes have a perfect correlation with other areas where the phenomenon appears. That is why a more detailed report will be published shortly.

16- In the coming report we will include sequential photographs and data obtained from investigation related to the studies on Thermal Plasmas developed by the Astrophysicist Dr. Massimo Teodorani.

17- We have to emphasize that the group of images obtained will be sent to the Argentinean Institute of Plasma Physics for future scientific determinations.