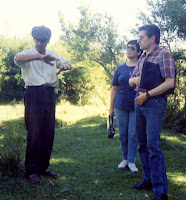 I must say that this name was never to my liking.
It is a mixture of two languages ​​word Ufo (English) and logo (Spanish) as already arguably not correct. -

In Spanish, the correct term should be "ovnílogo", but it appears that in this way is not very good so it is usually used in the other way ... and so many people call themselves.

But who is authorized to "qualify" or grant any of these two titles anyone?

In any discipline there are institutions, bodies or authorities that grant degrees and other qualifications that apply to these disciplines or specializations. That is right.

On the subject of UFO research, there is no one who is authorized to do so.

That is why anyone can call themselves in that way and unfortunately that's what happens.

It is also true that the press, in reports, interviews etc., due to ignorance, often called his interviewees thus without knowing the degree of knowledge or orientation on the issue that they have.

Thus contactees, mystics, charlatans and others are often introduced as "ufologists" ...... something that they do not deny.

Misuse of the term only serves to further complicate the serious study of the phenomenon, as it mixes indiscriminately all who are in any way related to the subject: those who study it, those who exploit it commercially and those who have make it become a kind of religion....

Who should be called that way in the event that the term were valid?

Only those who are dedicated to investigate UFO cases and study the phenomenon in general, using the scientific method and have years of experience in the field.

Personally I meet those conditions, but I would like to define myself as a scholar or researcher of the UFO phenomenon and not a term that, for the moment, is not supported by anyone ...

I think it is the right thing.