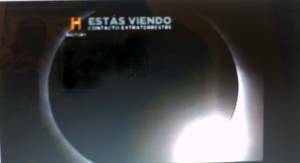 It is not enough for the already mostly conspiranoic, commercial, mythic, and even religious panorama of the current Ufological environment in Latin America, to be in such state of disarray, that now comes the commercial History Channel with a very biased “documentary” series on TV.

We put carefully aside those serious and sober investigators and scholars who –not surprisingly—in their vast majority have not being contacted to participate in this project.

From the very beginning, starting with its title, this video work is condemned to fail.

If you are just a good journalist, you will avoid to be so biased. But this is not a failure of the script, on the contrary, it is done on purpose, with all the intention to appeal to that mass of people who already believes in extraterrestrials, who devours videos, faked photos, magazines, books and all the commercial paraphernalia that goes around the UFO subject, but that is not ready to deal with it on scientific basis, with reasonable doubts, and with a logical way of thinking.

The host of the program reiterates many times the idea of “aliens” and “extraterrestrials”, accordingly with the script.

To give the impression of a real documentary, there are –in the first chapter that is the one we have been able to see so far—a couple of very brief  declarations –just a paragraph or two—taken from serious people. For this we want to mean, people who do not make their living exploiting the UFO subject, or military personnel.

Besides that, the interviews with Jaime Maussán (quite moderate in his words, it is fair to recognize), the impulsive Jose Ademar Gevaerd pretending to validate the faked photographs of the Trindade Island, and Alfred Lambremont Webre, with his ludicrous invention of Exopolitics, make of what could have been a serious documentary, a real mockumentary.

Now, we think that we are obliged to go beyond the mere interest to make a commercial product and entertain the people in general. We have to wonder what the real purpose of this TV series is.

Why it comes out now and why in Latin America?

Why it starts saying that UFOs are seeing every day when that is not true for the vast part of the world, but apparently true for certain countries in Latin America, namely, Argentina?

Why to contribute to create a psychosis around the idea of the activity of extraterrestrials?

Who could be behind this video work? Who benefits from it?

If we do not pose and think ourselves about these questions we would be very naïve!

It is possible that Latin America, and/or certain countries are currently being sweep by certain artifacts flying very high in the night and sometimes during daylight.  Artifacts of no conventional shape, maybe drones that could be taking images, getting communications, etc. over the region, due to different reasons.

Given certain political parameters, some nations interested to know about all those things are aware that if they were to ask permission from certain governments to do that surveillance activity, they won’t be allowed.

Therefore, because it is in their real interest to do so, there is not better cover-up that to boost the old clever idea started by the military intelligence about 60 years ago. “Let’s make believe the Latin American masses that they are visited by extraterrestrial beings, that what they are eventually seeing in their skies are

Speculation?  Oh yes! But quite honestly, think twice…Maybe it is not the “truth” that you would like to admit, maybe is something a little bit difficult to swallow, but putting aside any fantasy or mythical idea, this way of thinking is extremely reasonably.

And if we have it in mind, then there is an explanation for the production, edition and broadcasting of this particular video series to Latin America.

Meanwhile, the series will continue. Some UAPSG members and friends have been interviewed.

We are pretty sure that they faced their interviews in very good faith not knowing the final product that the History Channel would present.

Milton W. Hourcade, MDiv. [this article represents only the personal opinion of the author]