New book about UFOs and governments 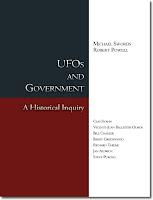 Our friend and colleague, member of the UAPSG-GEFAI, Vicente-Juan Ballester Olmos, an outstanding researcher and student of the UFO subject in Spain, just sent to us the following information that we share with you with pleasure:

It is a personal privilege to announce the release of a new book: UFOs And Government: A Historical Inquiry, a book that explores the history of the government's interaction with the UFO phenomenon. The international team of authors includes Mike Swords and Robert Powell (main authors), with contributing authors Barry Greenwood, Richard Thieme, Vicente-Juan Ballester Olmos, Jan Aldrich, Clas Svahn, Bill Chalker, and Steve Purcel. The book required four plus years to research, is nearly 600 pages long and has almost 1,000 references.

Governments around the world have had to deal with the UFO phenomenon for a good part of a century. How and why they did so is the subject of UFOs and Government, a history that for the first time tells the story from the perspective of the governments themselves. It’s a perspective that reveals a great deal about what we citizens have seen, and puzzled over, from the “outside” for so many years.

The story, which is unmasked by the governments’ own documents, explains much that is new, or at least not commonly known, about the seriousness with which the military and intelligence communities approached the UFO problem internally. Those approaches were not taken lightly. In fact, they were considered matters of national security. At the same time, the story reveals how a subject with such apparent depth of experience and interest became treated as if it were a triviality. And it explains why one government, the United States government, deemed it wise, and perhaps even necessary, to treat it so.

Though the book focuses primarily on the U.S. government’s response to the UFO phenomenon, also included is the treatment of the subject by the governments of Sweden, Australia, France, Spain, and other countries.

As a contributing author I am most satisfied by the final result as it brings a coherent, wide and exhaustive view of the Government handling of the UFO question over the years not only in the United States but in a global scale.

Published by Anomalist Books, this volume can be ordered from online booksellers, see the publisher’s book page: http://www.anomalistbooks.com/book.cfm?id=64