THE DESPERATION OF THE UFOLOGISTS

Ufologists are giving public signs of becoming desperate when they realize that this time the American military and particularly the Department of Defense is developing plans to deal very seriously with the UAP subject.

And dealing seriously means that there is no place for fantasy, for speculation, for unfunded suppositions.

Once, the USAF and the CIA used the story of a possible "extraterrestrial origin" of certain things seen in the sky, to cover up the development of various instruments and crafts needed to spy on the Soviet Union.

Now, things are totally different. If someone still pretends to talk about "aliens" he or she is helping the adversaries of the United States.

The DoD is considering seriously the possibility that some of the things seen by US Navy pilots during their training in restricted areas, could represent sophisticated gadgets from China or Russia, spying on the military maneuvers. That not only affects the safety of the pilots but also the national security.

For the first time in history, the military is talking realistically about what has been seen and recorded.

Now is the time to investigate, analyze, and come to conclusions identifying the intruders!

It is something feasible. It could be done, no matter the time it could take.

We applaud the position of the DoD and its authorities.

In the meantime, here is an example of the desperation that we talked about at the beginning..

Scientists Will Release 3 Terabytes of New UFO Data in 2022

Under this pompous title and presentation, the journalist Loukia Papadopoulos, reports that:

“In a blog published on Medium, self-proclaimed UFO researcher Ryan Sprague announced that UAPx, an organization responsible for researching UFOs, or UAPs (unidentified aerial phenomena — as the government refers to them), would soon be publicly releasing new data on said UFOs.

"When legally allowed, UAPx will provide, to the world, our reviewed and analyzed data as well as all raw data once we identify and secure storage and servers adequate to the task. It is the opinion of UAPx that the data our team collected, processed, and analyzed, is the most significant collection of scientific data regarding the UFO/UAP phenomena. UAPx adhered to strict scientific methodology in collecting the data, enabling expert analysis, and fostering peer review for potential publication in one or more scientific journals," said a press release for UAPx

This data includes over 600 hours of infrared video from numerous FLIR® cameras; a combined total of three terabytes of visual imagery through multiple camera platforms. Sprague added the analysis of this data reveals a significant number of anomalous objects and phenomena still undergoing examination before public release. He further claimed that the nature and type of information captured may imply definitive proof of UFO/UAP presence. 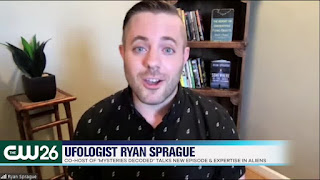 We find it preposterous to put this tale under the category of SCIENCE.

This is pure fantasy, and the responsible of that is a man named RYAN SPRAGUE that is another one who has found that UFOs well exploited allows earning a lot of money.

Who is this guy?: According to IMDb [Internet Movie Database] “Ryan Sprague is a lead investigator and co-host of Mysteries Decoded (CW Network) and a regular on Ancient Aliens (History Channel) and Beyond the Unknown (Travel Channel) He is the host of the Somewhere in the Skies podcast, and has authored two books under the same title, Somewhere in the Skies."

Enough to know this, to categorize his spectacular announcements just as figments of the imagination and teasers to attract attention.

That is why we said that “ufologist” has become an insult to refer in such a way an honest and serious person.

And this guy announces him to have “expertise in aliens”. Enough! No one could be tricked.

If someone follows this person it’s just because of a lack of rationality, logical thinking, and having immense credulity.