WHAT IS KNOWN ABOUT HYPERSONICS OF CHINA AND RUSSIA?

(this is an abridged information taken from the Georgetown Journal of International Affairs, belonging to the Georgetown University in Washington D.C.)

What do we know about China’s program and capabilities?

In its 2020 report on Chinese military power, the Department of Defense (DoD) noted the emphasis Beijing has placed on developing and testing hypersonic glide vehicles.  This is one element of a robust missile program that has led to the fielding of numerous medium- and intermediate-range ballistic and cruise missiles in support of China’s regional warfighting capability. The same report noted that in 2019 China launched “…more ballistic missiles for testing and training than the rest of the world combined.”  Unconstrained by treaty limits to which the United States adhered for decades, the People’s Liberation Army (PLA) has fielded a diverse family of missiles that it believes will create operational advantage in a future military confrontation.

As others have noted, hypersonic systems appeared late in this broader missile program, but are now being developed at an aggressive pace, characterized by a large investment in test facilities and engineering expertise and by frequent testing.  China has successfully tested the DF-17, a road-mobile medium-range ballistic missile (MRBM) designed to launch an HGV. 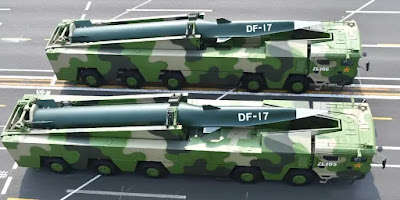 The DF-17 has an assessed range of 1,800-2,500 kilometers.  Its accompanying HGV, designated as DF-ZF (previously WU-14), is reported to possess a range of 1,600-2,400 kilometers and can achieve speeds of Mach 5 – Mach 10 with high degrees of maneuverability and accuracy.  Some reports suggest that China is also considering deploying HGVs on DF-21 and DF-26 theater-range ballistic missiles.

China reportedly conducted successful tests of the Starry Sky-2 (Xingkong-2) hypersonic cruise missile in 2018.  This system, believed to have a range of 700-800km and a top speed of Mach 6, appears to make use of an experimental “waverider” design that uses powered flight after launch and creates shockwaves to sustain its lift.  In its test phase, the Starry Sky-2 vehicle was sent into space by a multi-stage rocket before separating from its booster for maneuvered flight back to Earth.  Some analysts have suggested that this technology could emerge in the mid-2020s as an advanced anti-ship missile.

Little is known about other developmental programs for hypersonic vehicles, but China’s ambitious test program points to the PLA’s intent to field additional capabilities with varied aerodynamic attributes.  As an example, in 2015 China reportedly successfully tested a hypersonic unmanned aerial vehicle (UAV), presumably as a future intelligence, surveillance and reconnaissance (ISR) platform.  Whether this emerging family of hypersonic vehicles will perform “as advertised” by Chinese government agencies remains to be seen.  Arguments that characterize these developments as inherently “game changing” should be assessed cautiously.

What are the Russian systems?

The Kinzhal is an air-launched ballistic missile with a range of 2,000 kilometers. Currently launched from a MiG-31 fighter, the missile accelerates to speeds between Mach 4 and Mach 10 while performing evasive maneuvers to circumvent air and missile defenses. These capabilities enable engagement of heavily defended targets, such as aircraft carriers. Russian military planners appear to envision the Kinzhal at least in part in an anti-ship role, and Russian media outlets suggest it will be carried by the long-range Tu-22M3 Backfire bomber, which is primarily a maritime strike platform. 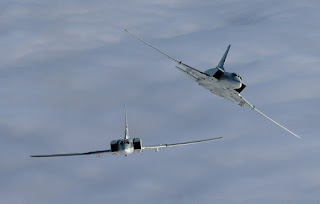 The Tsirkon is a ship-launched hypersonic cruise missile planned for deployment by 2023. Putin claims Tsirkon will be capable of reaching Mach 9 speed to strike ground or naval targets at a range of approximately 1,000 kilometers. Most Russian surface and subsurface combatants can be equipped with the Tsirkon, which would enable Russian submarines to loiter off the coastline of the United States or another NATO member and strike key command and control centers with minimal warning. 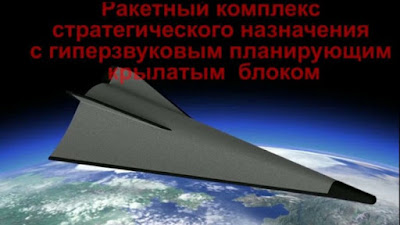 The Avangard is an HGV launched from an intercontinental ballistic missile (ICBM) capable of achieving speeds twenty-seven times faster than the speed of sound (Mach 27), according to Russian Deputy Prime Minister Yuri Borisov. As early as 2020, Avangard will be deployed on SS-18 Satan and SS-19 Stiletto ICBMs until they are replaced by the SS-X-30 ICBM (also known as RS-28 Sarmat). The SS-X-30 appears capable of carrying up to three Avangard HGVs, each of which can deliver a yield of up to two megatons, according to media reports.

The latest information about hypersonics in the USA 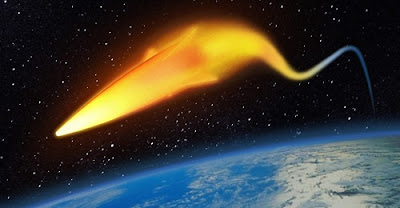 In this live fire ground test of the first stage solid rocket motor, the motor fired for the full trial duration and met performance parameters and objectives within anticipated ranges.

“We’re pleased to celebrate this important event with the U.S. Navy, Army and Northrup Grumman. This outcome today is due to our shared effort and determination to see this test on the Conventional Prompt Strike program succeed.”

“This live fire event is a major milestone on the path to providing hypersonic strike capability to the U.S. Navy and U.S. Army warfighters.”

“Northrop Grumman is proud to leverage our expertise in flight-proven solid rocket propulsion to support the nation’s efforts to develop an advanced end-to-end missile system capable of deterring emerging and future threats.”

CPS is a hypersonic boost glide missile and weapon system that enables long range flight with high survivability against enemy defenses. CPS and LRHW share a common all up round that can be launched from surface ships, submarines, and land-based mobile launchers. The U.S. Department of Defense has made developing hypersonic strike systems a top mission priority and Lockheed Martin’s investment in hypersonic innovation dates back more than 30 years.