A SURVEY AMONG U.A.P. INVESTIGATORS AND SCHOLARS - PART VIII 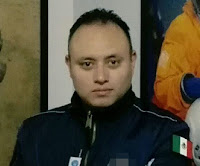 Lic. Salim DanielSigales Montes belongs to the new generation of researchers. He is from México. Is well related with the aeronautic environment and has acquired a good preparation in order to deal with unusual aerial phenomena, as it is clearly indicated for the different courses he has followed:

Founder of the Division of Intelligence and Exploration of Phenomena in the Sky D.E.F.C.O. Group formed by retired Captain Antonio Herce and Master Raul Maldonado specialist in Security and Physics. 2017- Dynamic Sessions "Study of Aerospace Phenomena" Space UP Mexico.
=================

Eight years ago I began using the acronym F.A. to write about the Aerospace Phenomena in México. Unfortunately, I know this acronym doesn’t catch the people's attention. In addition, the scientists in México consider the acronym for F.A. and UFO is the same. This represents a big problem for researchers to give a new approach.
For this reasons sometimes I use the acronym UFO only to catch the people's attention and afterward I suggest all of them to use the F.A. to talk about the Aerospace Phenomena in order to learn the importance and the difference because at this moment a lot of people think the acronym UFO mean extraterrestrial ship.
In my experience I consider that it is necessary to establish agreements with universities, science magazines and other media of communication to promote other acronyms like F.A. Our first problem are the TV shows where frequently use the acronym UFO to put the extraterrestrial idea in the minds of the public.

Definitely, in other countries, this topic changed very fast in the last 10 years. For example in France, Argentina, Uruguay, Chile, Peru and Brazil the governments invested to research the cause of aerospace phenomena. While in México this topic didn’t change in the last 40 years,
because it doesn’t exist one methodology and new knowledge. There are only books, news, videos and magazines where apparently present “evidence” but the researchers don't suggest anything to explain the causes of these events. In other words, the people use the UFO subject to sell their products.
I expect to give to my country a little change and motivate new generations to create knowledge and prepare researchers with different skills and profiles in this area. My principal target is to obtain the trust of my Air Force to publish articles to share my knowledge about this phenomenon.

I´m very sure this is the first step if you wish be a great researcher. I will describe this with the following words: UFOs do not exist. There are only people who ignore what they see.

4) If there were still some unexplained phenomena, what could it be?

We must work very hard to generate one change and new knowledge. It is very important to continue to use a method to explain the root causes of aerospace phenomena. In addition, we must maintain international work groups and establish communication with institutions like UAPSG, CEFAe, CEFAA, GEIPAN and other institutions to maintain the great job they do at this moment.

I think the principal problem is the ignorance. And we must change our methods of teaching in the schools and incorporate more science to have bases to create our own ideas about the existence other organic creatures --"extraterrestrial life"-- into or out of our system, galaxy or universe.
As a tactical note, I think it is necessary to make the people able to reach their own answers but based on science, not in speculations.

This question is very difficult, because first, we need to know if we are the first organic creatures with intelligence in the universe. If we are the first, it should be possible that the other systems were receiving our signals when our system doesn’t exist any longer. If you change my postulate, it is possible to receive signals from other universe creatures when they don`t exist any longer.
For me, the most efficient way is to develop technology to apply the metric of Alcubierre. Because I know that if we travel with our current technology, it is possible we will travel to a nonexistent destiny.

This is a theory full of controversy since it is considered by some scientists as a topic alien to
science for its lack of evidence. However, science should not rule it out and, on the contrary, continue research to corroborate or discard it.
For my part, I see it as a reasonable explanation as part of the macro processes that take place in the cosmos that for now, we can only deal with theoretically.
And it is enough to think that we live in a universe that is part of a whole, that is created and destroyed over the years. And for which undoubtedly, according to certain behaviors of the forces, can give way to the formation of organic creatures like us.
For now, there is nothing more to say about the subject hoping that our imagination combined with common sense will continue to help us to respond to everything that surrounds us.

Next publication: answers from Clas Svahn from Sweden