A SURVEY AMONG U.A.P. INVESTIGATORS AND SCHOLARS - PART XIII 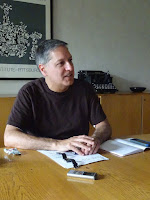 Greg Eghigian is Professor of History at Penn State University (USA). He is a historian of science

and medicine who has written extensively about the history of the human sciences, focusing on

such subjects as disability, mental health, marginalization, and criminality. He is presently writing

a book about the global history of UFOs and alien contact since 1946.

Yes, I use it because historically it has been the most common usage. Most of the general public know of the phenomenon in these terms rather than as UAP.

Oh, most certainly. I can certainly see a marked difference, of course, in how I viewed it as a young child – when I accepted claims uncritically – to later on in my youth – when I found skeptics more convincing. Now, I view the phenomenon through the eyes of historical ethnography. It's given me a new perspective, but opens up many new questions about how ufology – and the phenomena associated with it – have worked in tandem with one another.

Yes, to be sure. The two are parts of the same coin.

I myself seek explanations from the natural and behavioral sciences. It's not possible to always come up with a satisfying explanation in every individual case. But more often than not, these provide the best guides.

My interest in UFOs is different than most ufologists. I am interested in the UFO phenomenon as a sociological and historical phenomenon. That is to say, I am interested in studying not simply UFO reports and sightings, but also in how those concerned with studying and thinking about UFOs have gone about their work over time. In these terms, I consider the UFO enterprise to be a social attempt at deriving meaning from the cultural aspirations and challenges surrounding the space age.

When it comes to persuasion, one can only do so much (politics, for instance, offers a good example of the limits of persuasion). In the end, I think it important to always listen respectfully to others with whom one disagrees and to address their concerns and notions in a fashion that does not try to diminish them as persons. Too often, discussions about such matters devolve into talking past one another and name-calling.

I remain skeptical about SETI. The effort strikes me as more than a little overly ambitious. But it remains a project about which I need to learn more before arriving at any definitive stance.

I've not a read enough about the subject to come to any informed opinion.  So I'm loathe to express a judgment on the subject.

Next publication: answers from the historian Jan Aldrich