A SURVEY AMONG U.A.P. INVESTIGATORS AND SCHOLARS - PART VII 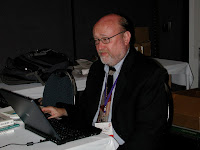 George M. Eberhart is a librarian with a special interest in all things unusual, from UFOs and Bigfoot to ESP and ghosts. He is employed at the American Library Association, where he is currently editor of American Libraries and is the compiler of The Whole Library Handbook: Current Data, Professional Advice, and Curiosa about Libraries and Library Services and its subsequent editions. TheWhole Library Handbook is a guide for library professionals that contains "everything you ever wanted to know" about the profession and library facilities, according to Cathleen Bourdon in American Libraries.


He belongs to the J.Allen Hynek “Center for UFO Studies” (CUFOS) of Chicago, Illinois.

I use UFO exclusively, since few people know what UAPs are, even though the definition is more encompassing and perhaps more descriptive.

2)   Have your idea about UFOs changed along the time?

I really have never had a fixed opinion on what UFO phenomena represent, other than they are multicausal. Some may be extraterrestrial, others interdimensional, others psychic in nature, still others forms of unknown natural phenomena like earthlights, and others a psychological yet anomalous effect. If you take every incident on a case-by-case basis, after you weed out the many probable hoaxes and misidentifications, you are left with a bizarre array of causal stimuli that only have a small subset of common characteristics. Over time, I have gotten more rigorously skeptical, though still open-minded.

3)  Should the UFO investigator become an expert in IFOs?

Absolutely. Just as a cryptozoologist needs to know what real animals might masquerade as a cryptid, the ufologist needs to be an expert on meteorology, eyewitness testimony, elementary physics, psychology, astronomy, history, and many other subjects.

4)  If there were still some unexplained phenomena, what could it be?

I think I answered that in the second sentence of question 2.

I consider myself more of a bibliographer and historian of the subject. I would like to see UFO literature and documentation more widely accessible and critically assessed. More care needs to be taken in individual cases to get the details right on old cases as well as new ones. I’ve learned much over the years by just studying the subject, and I think others might too. It almost doesn’t matter what specific cases turn out to be or what the phenomenon is as a whole.

6)   Is it possible to do something effective to bring the truth to the public and to change the mind of those who still proclaim or believe that extraterrestrial beings are living with us on Earth?

We live in a postmodern world where any ill-informed person can have an opinion on any subject without bothering to acquire mastery of the field. It’s too much work to learn complex philosophies, and there’s no money in it. I’m not sure what I’d want to change peoples’ minds to anyway. A scientific, replicable confirmation of the nature of anomalous UFOs will convince many people (if and when that happens), but there will still be those who will allege fake news or conspiracies. It’s not worth trying to convince anybody of anything. Maybe it’s better just to have a reasonable conversation.

7)   Do you think SETI and similar searches are valid activities?

Yes, especially as different techniques are now being used to creatively search for exoplanets, exobiology, and exotechnologies. Even if you don’t find anything, you will still learn something about the nature of the universe.

8)   What is your idea about multiple universes?

Unproven, but the debate is intriguing. I’ve heard Neil de Grasse Tyson and Michio Kaku go on quite reasonably about multiverses via string theory, but I don’t really understand any of it. Nothing has been proven yet. Maybe George Adamski’s golden-haired “Venusians” will return some day and explain it all to us.