A SURVEY AMONG U.A.P. INVESTIGATORS AND SCHOLARS - PART XIV 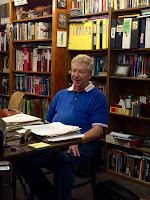 Aldrich is a meticulous historian of the UFO subject. His works are internationally recognized.
===========

Since my interest mainly concerns the history of the subject, I use the acronym UFO.  Unfortunately in the United States the acronym in popular culture equates to extraterrestrial space ship.

Certainly my views have changed as has my approach.  Since I am more interested in the history, what UFOs are has become secondary.  Rather how do individuals and institutions react to the subject.  It does not matter what UFOs are or if they exist, Keyhoe, the military establishment, amateur groups do exist, these are the things which can be studied in an historical context.  I have no personal theory about UFOs.  Other peoples' beliefs and interactions are my interest.

Probably.  Such an investigator should at a minimum know where to find information on known phenomena and activities.

Probably with the unexplained incidents, there could be a number of various and rare phenomena.  I am reminded of a physics experiment which I was hired to work on in college.  Bombarding a target with high energy protons.  The results were varied depending on the interactions, Lambda particles, electron-positron pairs, and other particles.  So unexplained UFOs could involve multiple unexplored answers such as insects, arachnids, rare electrical phenomena, grazing or satellite velocity meteors, unusual aircraft and lighter than air configurations, and maybe more exotic explanations like ET, etc.

It is akin to various phenomena which in the past were disregarded due to having no ready explanation.  Transient Lunar Phenomena, meteors causing flashes on the moon.  Now any space scientist will tell you today, well of course, we know that meteors hit the moon.  However, historically until it was viewed by more than one reliable observer, such was not taken seriously by many.  Ball lightning was completely explained as after images or other means for decades--effectively debunked.

I am not concerned with beliefs, except to chronicle their origins and evolution.

I am not sure about searching for radio waves from other possible ET civilizations.  A sufficiently high technical civilization might communicate by some other means.

An idea like others with no physical evidence.  So it is a theoretical construct with no obvious way yet to test the theory.