DARPA AND THE XS-1 PROJECT 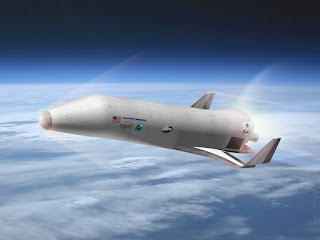 According to the DARPA presentation, the XS-1 project carries four prioritized goals: the design of a reusable booster system with launch costs traceable to <$5M/flight; to fly the booster 10 times in 10 days; to demonstrate an immediate payload to orbit capability with cost traceability to the Operational System; and to enable routine, low-cost space access.

Each of these four prioritized goals carries a test objective and a test threshold.

For a reusable booster with a cost per flight of less than $5 million USD, DARPA has set a test objective that XS-1 be able to transport equal to or greater than 3,000 lbs to a 100 nmi reference orbit inclined 90 degrees.

The threshold of this objective currently stands at an identical payload capacity to a 100 nmi reference orbit inclined 28.5 degrees.

For the flight rate goal, DARPA’s stated test objective is to achieve 10 flights in 10 consecutive days – even when weather, range, and emergency delays are accounted for (threshold).

To enable this routine access to space, DARPA hopes to “fly the XS-1 to Mach 10+ at least once, and stage at high Mach to minimize the size and cost of the upper stage, “ with a stated developmental threshold for this at Mach 3+ travelling speeds and Mach 2+ staging speeds.


While DARPA’s name for this project implies a plane or Space Shuttle-like design, the Agency is actually open to several design options for the commercial field, 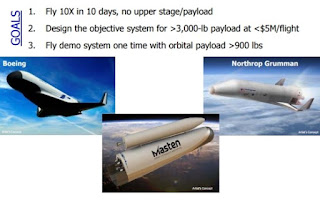 with the presentation containing different notional designs for the XS-1 from Boeing, Masten, and Northrop Grumman – among others.

It could launch from the ground, air, or sea barge and could either land downrange or return to land at its launch site.

Taken from an article of NASA's Chris Gebhardt