THE TRUTH IS NOT WHAT YOU LIKE IT TO BE, BUT WHAT IT REALLY IS 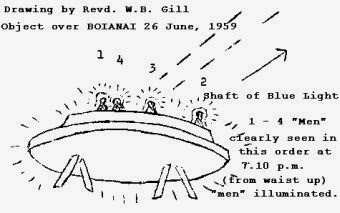 No matter what issue or subject you choose, the truth, at the end, is only one.
It is hypocritical to pretend that about a same issue there are many truths, yours, mine, his, her....

Of course, when there is something that demands investigation and study, unless you take time to develop both activities with intellectual honesty, seriousness and consecration, you won’t be capable to reach the truth. Instead, and more possibly, you will adhere nearly irrationally to pseudo-truths fabricated deliberately by those who want to sell you their products, (books, CDs, DVDs, trips to some “special” places, etc.). In other words, you become mislead and misinformed.

The search for the truth implies dedication, a firm purpose, and a lot of time.
But when you reach it by yourself, when you feel sure that you came to a point of no return, then you can look retrospective and discover the different stages you went through.
Dealing with the Unusual Aerial Phenomena (we prefer this designation that the insufficient and confusing “UFO”) you would be able to analyze your path to the truth and then you will discover probably three clear stages:

a)    the stage of enthusiasm, when you for the first time in your life get in touch with the subject. You are nearly blinded by the many things you are able to read, you are confused, but you think that you are in the right way. You feel yourself lucky that you can “understand” what many people ignore. You are the “owner” of a knowledge that you share with other people that think and feel like you. You become persuaded that you are dealing with the most extraordinary event in human history: e.g. the extraterrestrials and that they are among us.

Then you create an organization, you print a bulletin, you create a web-page you             use Facebook, you keep a lot of e-mail, and maybe have a radio or a TV program.

In the old times, things were not so easy as they are now:  immediate communication via Internet, Google maps, cellular phones, GPS...But, we created an organization, we printed our bulletins using mimeograph, we had  radio programs and also a TV program, we gave public conferences for free, we travel a lot, and we established the best possible relations with scientists, technicians and the personnel at the control tower and operations at the International Airport, as well as with the Air Force.

Without these two supports (the Air Force and the personnel at the airport) our work couldn’t have been as efficient as it was.

This is a lesson for the newcomers. Unless they are able to reach that level, their investigation wouldn’t be complete and satisfactory.

b)    the stage of reflection. If you are intellectually honest, if you are sincere with yourself, slowly, step by step, case after case that you investigate, you discover that the main thing which makes important the media is that many times they are the first to make public something that happened somewhere.  But at a second level, when you go to the place where presumably something strange happened, the first lesson you will get is that regretfully, the media do not share the same interest that you have. In other words, they exaggerate, they distort, they twist declarations, details, etc. to make sound them really strange while you –the investigator—came to know it was not.  You face the reality, and the reality allows you to have an explanation of what happened for the 98.5 to 99% of the cases.

It is then when you begin to think about the whole subject of the UAP, and you start to doubt about cases investigated by other people in other countries, because you don’t know the investigators and their criteria, you don’t know how much you can trust on what they report.

You start to realize that unless there is a protocol, a standardized procedure for the investigation of UAP reports and the study that follows, you can’t accept “bona fide” the information spread by many sources, be they web pages, videos uploaded in YouTube, pseudo-documentaries, and mostly touristic and “pour la gallerie” congresses that allow some people introduced as “stars” to massage themselves their ego, and become a reinforcement of faith, for all those that believe what they are going to hear.

You begin to become skeptical about the cases. You will demand a total opening of official or private files, and specifically to know how the investigation was made. Unless you are able to know those parameters, you certainly will apply a very useful and needed filter to the news that go around the world in reference to the UAP subject.

You will be very selective about your sources of information. You will demand all the time responsibility and a trustable source, i.e. a well known university, a technological institute or a scientist or technician with good international reputation.

You will think about the subject as a whole and you will find yourself throwing away some hypothesis that along the time have demonstrated to be not useful, or that definitely do not help to solve the problem, to explain satisfactorily the UAP issue.

You stick to your rational position, applying common sense, the Occam’s razor, and trying to know as much as you can about Astronomy, Astronautics, Aeronautics, Physics, Psychology, Photography, etc.; because without certain knowledge of these disciplines, you are a real ignorant about the things that matter most to have a valid answer to the challenges posed by the UAP.

Parallel to that, you realize that one important thing you can do, is to educate the public. The more the people are informed, the less they will report to have seen UAPs. Instead they will get to know about natural phenomena and technological developments that could explain a lot of different situations to which suddenly people could be exposed.

c)    the stage of deception You have arrived possibly to the last stage of your long journey.

It is when you look around and realize how big the human stupidity is. How easy is for swindlers and merchants to exploit the ignorance of the vast majority of the people, included those fanatics, adherents to conspiracy theories, fantasy-prone personalities, and people that call themselves “investigators”, and are simply enthusiastic newcomers to the arena.

It is possible that you won’t be able to understand why those who just started your journey do not take advise, do not try to learn, and do not consult with you about a lot of things that you have acquired in your decades of experience.

It is even possible that those newcomers don’t get in contact with you, that they will think by themselves that they have a clear idea about the whole UAP issue, and will call you with disrespect as “skeptical” or accuse you to be serving some obscure interests or projects.

Forget those people and forgive them, because “they don’t know what they do”. You fine tune with those who are at your same stage, you deal increasingly with scientists, with people using instruments to know intrinsically the real nature of the UAP.

You change the way you have done investigation and study for years to a new approach that demands that you yourself will try to be face to face with the phenomena; analyze afterwards the data collected, share it with scientists, and try to reach a conclusion, if it is possible.

If you do so, you’ll know directly the real nature of the UAP. You are touching the truth.

d)    the stage of a final decision

Things are not so simple.

Because you realize that you are learning mostly about the nature of the Anomalous Luminous Phenomena, but they are not all what has been seen and reported through the years.

And when you go back to the history of the whole issue, you realize that there were times during the decades of the 40’s and 50’s of the former century, when there were not only manifestations of some kind of energy, but also what could be called properly “objects”, in other words, aircrafts of a certain kind that were not airplanes or helicopters, whose flying dynamics, shape, and other characteristics couldn’t be ascribed to what was generally known.

They revealed to be the product of another kind of Physics, and the practical application of an advanced technology not widely spread in the world but constrained to a small group of people.

And then if you try to study piece by piece the story of the phenomenon since the beginning you would find that many times it appears intertwined with politics, with intelligence agencies, etc. and then, you will feel for the first time that you have landed on solid ground, that you are touching the truth in its total and complete dimension.

And when you reach to this point, it is possible that you will keep silent forever, you will leave the Unusual Aerial Phenomena or you will take the very serious risk to reveal all what you were able to know, aware that your own life could be at stake.

Now, to take that decision you are alone...
Posted by Milton at 7:18 AM