We knew on January 10th, that our dear friend and UFO investigator, Mr. Vicente Curci, passed away on July28, 2013.

A heart attack –the fourth that he suffered— was the final cause of his death.

We have to add his name to the names of Hermann Jegerlehner, Walter A. Cifarelli, and Dante J. Moscatelli.

Curci was co-founder of CIOVI, he worked efficiently in the Center investigating cases, sharing the reading of books and establishing good contacts that helped with the activities of the institution.

He was the creator of the Center’s logotype.

He participated actively in the organization of the First (and so far only) River Plate Colloquium on UFOs, celebrated in 1962.

He traveled to Buenos Aires, Argentina, together with Hermann Jegerlehner,  where they met with Navy Captain Omar R. Pagani, and knew directly about the investigations developed then by the Argentinian Navy.

After some years, he left the Center for personal reasons, but he returned later and once again was ready for action.

In the decade of the 70’s he developed a very intense field investigation, traveling to the rural areas of Uruguay, specifically to the Departments of Rivera, Tacuarembó, Rocha and Lavalleja. 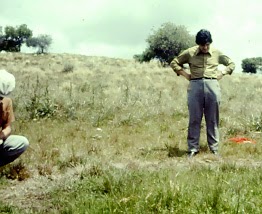 In the locality of José P. Varela (Department of Lavalleja) investigating a "trace" produced by Basidiomycetes mushroooms. With him --to the left-- Agronomy Engineeer Del Puerto.

We will always remember his kind smile, his will to reach an agreement when there were different points of view among the members of the Center while we were discussing a case.

And also we always remember that when American astronomer Donald H. Menzel came to Uruguay and was asked about the objects seen in the Delbert Newhouse film, Menzel said that they were seagulls, and Curci commented “well, then they were racing seagulls!”

Vicente Curci was one of the Uruguayan pioneers in the UFO field. He belonged to that group of people who build-up Ufology in the country when they created CIOVI.

Those were difficult times, when dealing with “flying saucers” as they were called, was enough reason to have to afford the mockery of journalists and people in general.

He with the other members of CIOVI worked hard and pushed to be recognized as serious investigators and to change the use of “flying saucers” for the technical designation of UFOs.

He will be always remembered as an excellent colleague, UFO investigator and student, a good father and husband, and an honorable citizen.

May the peace be with him.