THE THOUGHT OF Vicente-Juan BALLESTER OLMOS 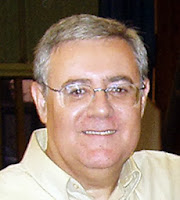 What a person thinks is important when that person speaks about what he or she knows well.

But when the distinguished Spaniard Mr. Vicente-Juan Ballester Olmos speaks, it is most than relevant, because he is a seasoned investigator and student of the UFO subject.

V-JBO has dedicated his life to the phenomenon acquiring the experience and expertise only reserved for the few.

Currently he works on his Project FOTOCAT, a selective world catalog for the classification and analysis of presumed UFO photos.

That is why so important to know what he thinks about the whole issue and the way it is treated in general.

Those who are newcomers in this field should pay great attention to what VJBO says, because they need to learn, and nothing is better than to learn from those who know what they are talking about.

The attitude of the people in general

"Commonly, people are ignorant of the appearance of astronomical bodies and may be surprised by the view of planets and stars. Probably, predisposition helps, if not other factors. As a matter of fact, the files of UFO investigators are filled with observational trash, misinterpretations and oversights, not to mention hoaxes, fakes and frauds."

"In Chile, there has been done an extraordinary work of private investigation around the confusion with airplanes or contrails that have been taken by presumed UFOs. Those are observations that should never be part of a list of UFO cases, but which even the meteorological, military and scientific authorities have not been capable to clarify adequately.

If at this point the investigators who have enough formation and resources are incapable to see in some images that they are dealing with simple condensation trails and airplane lights, who can believe that someday Ufology would be taken seriously?"

The quality of the information

"Generally, the quality of UFO information is not as good as it should be. Sometimes it is difficult to check and verify facts, hence the high proportion of sighting reports branded as insufficient data".

Basically, the common denominator in the spurious images is that nothing strange was observed visually at the time of the snapshot. In digital imaging, the Charge-Coupled Device (CCD) is the image sensor. When you focus the sun or a very bright source of light, the CCD is over-burnt by the excessive illumination input and it manages to create false –i.e., surreal– black orbs where the light density is greatest, that is, at the center of the radiant body."