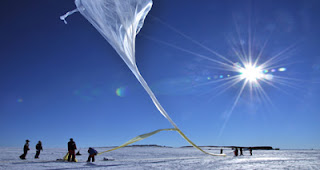 In Antarctica in January, 2013 – the summer at the South Pole – scientists released 20 balloons, each eight stories tall, into the air to help answer an enduring space weather question: when the giant radiation belts surrounding Earth lose material, where do the extra particles actually go? This NASA-funded mission is called BARREL, for Balloon Array for Radiation belt Relativistic Electron Losses.

Each balloon launched by the BARREL team floated for anywhere from three to 40 days, measuring X-rays produced by fast-moving electrons high up in the atmosphere. BARREL works hand in hand with another NASA mission called the Van Allen Probes, which travels directly through the Van Allen radiation belts.

The belts wax and wane over time in response to incoming energy and material from the sun, sometimes intensifying the radiation through which satellites orbiting Earth must travel. Scientists need to understand this process better, and even provide forecasts of such space weather, in order to protect our spacecraft. Credit: NASA
Posted by Milton at 4:15 PM