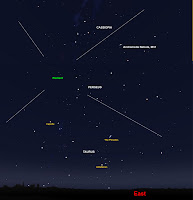 Look up towards the North-East from 11 pm onwards on the nights of August 11th, 12th and 13th and 14th. After midnight, as Perseus rises higher into the sky, the numbers seen may well rise too! Most meteors are seen when looking about 50 degrees away from the "radiant" (the point from which the meteors appear to radiate from) which lies between Perseus and Cassiopea. (See the star chart below) The Perseid meteors are particles, usually smaller than a grain of sand, released as the comet Swift-Tuttle passes the Sun. The shower is quite long lived, so it is worth looking out any night from the 10th to the 15th of August. This last day could well be the best as the Moon will be rising later and be less bright. Good hunting!