AVI LOEB: FROM ACADEMIA TO THE MEDIA 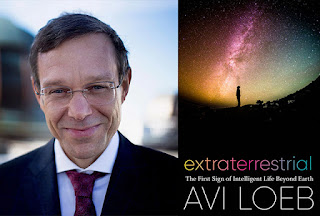 This native of Israel, and former conscript soldier of that nation, is now a Professor at Harvard University. He received his Ph.D. in plasma physics in 1986 when he was 24 y.o. from the Hebrew University of Jerusalem.

From 1988 to 1993 he started working in theoretical astrophysics and in 1993 he went to Harvard University where in 1996 obtained his tenure as Professor.

Now he is a Professor of Science and former chair of the Department of Astronomy.

It is important to know that –contrary to what many people could think—a university professor, no matter how relevant could be, does not earn big money. Salaries in Academia do not stand out as being very good ones. A professor is obliged to work a lot, made investigations, publish papers, and write books, but that is part of what he or she has to do to keep his position.

To understand the incredible idea developed by Dr. Loeb that the object called “Oumuamua” is an explorer of extraterrestrial origin, we have to go to 1996, more precisely to December 22, when Scientific American published an article written by Ann Finkbeiner under the title “Inside the Breakthrough Starshot Mission to Alpha Centauri”

Finkbeiner sums up his article writing:

·        A Silicon Valley billionaire is funding an audacious plan to send a spacecraft to one of the sun's closest stellar neighbors.

·        The mission, called Breakthrough Starshot, would use lasers to propel “light sails” attached to small, smartphone-like chips that could take pictures, make measurements and beam their findings back to Earth

·        Experts say the plan is risky and expensive and may not work—but is nonetheless exciting, offering a chance to send the first man-made object to another star.

The man driving the Starshot project is Yuri Milner, born in Moscow where he studied Physics but he didn’t do so well, then he came to the United States where “he went into business, became an earlier investor in Facebook and Twitter and amassed a fortune reported to be nearly $3 billion.” writes Finkbeiner.

The article continues by saying: “In early 2015 Milner recruited a central management team for Starshot from people he had met at various Breakthrough gatherings. Starshot’s Advisory Committee chair and executive director, respectively, are Avi Loeb, chair of Harvard University’s astronomy department, and Pete Worden, who directed the NASA Ames Research Center and was involved in a DARPA/NASA plan for a starship to be launched in 100 years. Worden recruited Pete Klupar, an engineer who had been in and out of the aerospace industry and had worked for him at Ames, as Starshot’s director of engineering.”

“They in turn pulled together the impressive committee, which includes

specialists in the relevant technologies who are apparently willing to participate for some or no money, as well as big names such as Facebook’s Mark Zuckerberg.”

And –as Lee Billings writes in Scientific American on February 1st. 2021, “All that began to change in late 2017, however, when astronomers around the world scrambled to study an enigmatic interstellar visitor—the first ever seen—that briefly came within range of their telescopes.”

It is from this important contact and participation in the “Breakthrough Starshot” project that Loeb takes the idea of “Oumuamua” as a kind of probe launched for some intelligence of another system, to explore our planetary one.

Interestingly, the first proposal of his idea about “Oumuamua” is written in a paper published on November 12, 2018, by “THE ASTROPHYSICAL JOURNAL LETTERS” together with his student Shmuel Bialy.

There, using careful language, Avi Loeb wrote: “what kind of object might have such a small mass-to-area ratio? The observations are not sufficiently sensitive to provide a resolved image of 'Oumuamua, and one can only speculate on its possible geometry and nature.”

Billings comment: “The paper has been a smash hit with journalists but has fallen flat with most of Loeb’s astrobiology-focused peers, who insist that, while strange, ‘Oumuamua’s properties still place it well within the realm of natural phenomena.”

In 2021 appeared his book “Extraterrestrial – The First Sign of Intelligent Life Beyond Earth” where Loeb totally abandoned the careful language used before. He left his position as Chair of the Astronomy Department of Harvard University and launched a promotional campaign appealing to as many media outlets as possible.

When journalist Lee Billings asked him: “Hi Avi, how are you?” His reply was:

“I’m good, but I have been losing sleep, because in order to cope with all the media requests, I’ve been doing interviews with, for example, Good Morning Britain at 1:50 A.M. and Coast to Coast  fromAM at 3 A.M.—plus appearances on U.S. network and cable television. I’ve got about 100 podcast interviews to do in the next few weeks. And I already recorded long conversations with [podcasters] Lex Fridman and Joe Rogan for their shows. I’ve never seen anything like this; there has been so much interest in the book. I mean, there were 10 filmmakers and producers from Hollywood who contacted me over the past few weeks! I joked with my literary agent that if a film comes out of this, I want to be played by Brad Pitt.”

Billings pointed out to Loeb that: “you mentioned you appeared on Joe Rogan’s podcast, one of the most popular in the world. That’s great for selling books. But given Rogan’s reputation for spreading dangerous misinformation on his podcast, is that sort of thing a wise move?”

And facing the barrage of activity with the media that Loeb himself describes, I wonder if that description fits properly the life of a scientist and an astrophysicist. I sincerely don’t think so.

Undoubtedly his proposal is audacious, imaginative, and has the 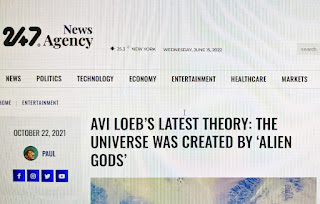 potential to drag many people to the conviction that we have been visited for an exploration craft  of another intelligence.

But in science you have to be parsimonious, you need to repeat the experience many times, or –for this particular case— that other objects similar to Oumuamua cross our system, to reach the conclusion that they are artificial and gathering information from us.

Avi Loeb could have success selling his book, but what matters is not what simple people could think but what was the reaction of scientists.

And to that purpose I recommend to read “‘Oumuamua wasn’t an alien spacecraft, and ignoring the science can’t make it so The most unique interloper into our Solar System has a natural explanation that fits perfectly — no aliens required”  published in BIG THINK on November 18, 2021. https://medium.com/starts-with-a-bang/oumuamua-wasnt-an-alien-spacecraft-and-ignoring-the-science-can-t-make-it-so-a2231f2e581e