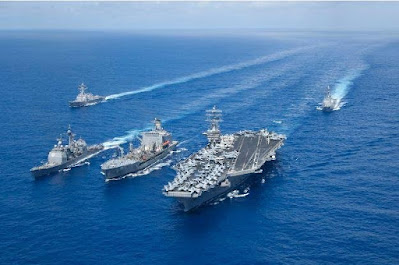 To the old people that have been related to the UFO subject for decades, what is going on now with the reports made by the US Navy pilots and the official reaction, has apparently a parallel with what happened to start in 1947.

Some of those investigators could say “we have already seen this movie”.

The involvement of the military, the concern of legislators, is similar.

But there are great and important differences.

At that time there was a division within the US Air Force. Some people --like the USAF General Commander, Brigadier General George Schulgent tried to investigate and know what exactly have been doing by Germans until the moment they lost the Second World War, and in the immediate after.

On the other hand, some other people, like the USAF Division General Charles P. Cabell,  tried to take advantage of the situation with the creation of the myth of aliens arriving on our planet.

The United States was already in a Cold War with the Soviet Union and there was the imperative need to spy on the enemy. The extraterrestrial story will be a good cover-up for testing new devices, instruments, and airships that could be used with that purpose.

The USAF created successively Projects Sign, Grudge, and Bluebook to deal with the reports of "Flying Saucers" made by pilots, police, and the public in general.

But those Projects had the counterweight of the push for the ET myth done by the C.I.A. that created NICAP, and gave Maj. Donald Keyhoe certain information of “flying saucer cases” under the condition not to mention the source of them which was the same USAF.

The creation and operation of NICAP gave the impulse to the creation of a myriad of private organizations throughout the world supposedly with the purpose to investigate the ET mystery. Some of them just exploited the

issue to make money. This regretfully has been a reality until today.

Captain Edward J. Ruppelt created the acronym UFO to get rid forever of the ominous reference to "flying saucers", and it was universally adopted.

Nevertheless, it was not enough to clean the USAF of the accusation of being hiding vital information about UFOs, to the point that it needed to appeal to a University to put an end to that pathetic situation.

It was the turn of the University of Colorado and the physicist, Dr. Edward Condon to lead that work. Regretfully, the remedy didn't cure the sickness.

Things were not well done and an infamous memorandum ruined all the purposes to put an end to the ET myth.

Some professionals abandoned the Group of the Colorado University denouncing the irregular situation.

The conclusion written by Dr. Condon before the work of the Group was done became nonsense.

The USAF decided not to deal any longer with the UFO subject, at least publicly.

This is the time of the US NAVY, which has not been without having UFO cases during that old period.

It’s enough to remember the Navy Officer Delbert C. Newhouse that filmed “UFOs”  on July 2, 1952, from Tremonton, Utah. Or the series of incidents during “Operation Mainbrace" in late September of 1952 where UFOs were seeing and detected by the USS "Franklin Delano Roosevelt” and other ships belonging to the OTAN Allies.

But currently, the take of the US NAVY is different from that one of the USAF.

The mere idea of "extraterrestrials" is totally out of the scope. Instead, there is a realistic approach in which what is seeing presumably could be coming from Russia, China, a private organization, and even a top-secret US program.

The US NAVY plans to appeal to the work of scientists and technicians to determine the real nature of what has been seeing, and to that purpose, the Pentagon sent the report to the Senate of the United States requesting the needed money to cover the expenses for such effort.

The Pentagon got rid of the acronym UFOs and instead has designated the issue as UAP, wisely substituting the idea of Objects for the more inclusive word Phenomena which covers objects as well as forms of natural or artificially generated energy.

Summing up, I find the new approach correct and wise.