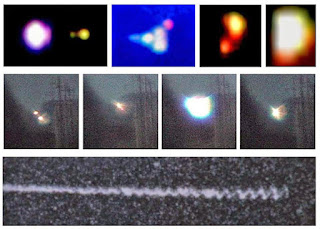 We have brought to the attention of our Spanish speaking members, the content of the paper written by Argentinean Anthropologist Dr. Diego Escolar, about his experiences with Anomalous Luminous Phenomena in the Calingasta region, more specifically at the Pampa del Leoncito, Province of San Juan.

The paper is also English. See http://www.earthlights.org/pdf/Lights-in-calingasta-valley.pdf
Essentially, Dr. Escolar points out the following situations and his comments:

“A first classification of the observed or observable behaviours of the objects that take our interest may be the following:

1.Appearance, approximation movements and repeated disappearances up to a distance of a hundred metres.
2.Quick movement in the air, bounces in different directions, and return to the turning point in less than a second
3.Interval without manifestation.
4.Very slow approximation from twenty or thirty kilometres to a distance of fifteen metres and equivalent retreat; with chromatic changes from white-greenish to orange-reddish; important increase in the size of the objects; luminous contact.
5.Appearance and approximation of a similar object simultaneously with the final stage of approximation of the former object, with following of traces and equivalent chromatic changes, though with a quick disappearance.
6.Interval with the only manifestation of a long-lasting retreat of the luminous object up to twenty or thirty kilometres.
7.Appearance and displacement of lights over the Pampa del Leoncito, chromatic changes, shape changes, simultaneous relative formation among the three objects, detection of traces (prints) at a great distance, flight and disappearance in the air of one of the objects.
8.Flight and direct approximation up to zero distance with regard to us (several times) of a red luminous object apparently of low density.
9.Reappearance of the third light in the Pampa del Leoncitoand then a set of luminous signals in in static position.

From this classification we can affirm that in the events 1, 4, 5, 7, 8, there were evidences of interactions of the objects with our group: The approximation movements show at least some kind of recognition or acknowledge of our presence and orientation of their behaviour with regard to our own movements. These interactions fulfilled different patterns and they also implied transformations of the behaviour along with the succession of events, which were solved by progressive approximations to lesser distances and for more prolonged times.”

“Really, the interactions implied in some cases factors of collective organization of the objects, such as coordinated approximation of two of the objects at the same time (5) and coordination of their movements (7, 9). But we should add another component: the existence of communication phenomena among the objects and with regard to our group. In event 9 we have a period of no less than fifteen minutes during which the luminous objects made in unison bright signals located in a triangular formation, covering the extremes of the Pampa.  Apparently the luminous signals were interpreted by the objects: that is to say, taking in account more than the simple emission, the reception of the others, evidenced because the three objects began to send flashes in a brief succession until doing it simultaneously. If this affirmation were right, we could risk as a hypothesis that the behaviour of the objects includes the symbolic function; they are able to express themselves by means of a code which implies the capacity of abstraction, displacement and representation, that is to say, the substitution of an object by another that represents it, by means of shared signs. It would also be possible to apply to this event a scheme of communication emitter-message-receiver, where we could decipher their language that is conveyed the luminous signals. This leads us to another question, consisting in how the objects not only emit but also perceive the luminous signals. Is it a natural property, as the organs of the senses or the photosynthetic cells? Is it a technological capacity, the same as a photoelectrical cell? In the first case, we would be in front of a proof of the biological character of the objects. In the second case, we would be in front of a proof of their cultural character, further than the confirmation if the objects themselves are a technological product or if they are living beings with technological developments in use. But turning to the concepts of social interaction and communication applied to the events and objects of reference, we failed to praise the phenomena of communication among the objects and our group. Really, we can also propose that this type of communication (and then the social interaction) was also given in the events 5 and 7. In the first case we have the tracing of prints at night by one of the objects. That behaviour not only implies the recognition of traces of our previous presence in a place, but also the recognition that those traces organized in succession, represented a previous sequence of movements. In case 7, such recognition seems to have taken place with regard to the traces of our journey in the Pampa. In both cases (5 and 7) it can be applied, as we said for the events of communication among the objects, the question for the biological or technological origin of this capacity of perception. If we accepted a biological source, we could suppose that this perception is quite a developed capacity, either it is ―visual‖ or any other type: we could admit that we are facing a visual capacity, this is a perception based in the detection of luminous effects on the bodies ( in concordance with the perception of luminous signals which we have already analysed), or in front of non-visual capacity (as smell or touch) which allows to recognise prints on the ground starting from the contact with an organ. Finally, we could also suppose a perception of auditory type as the orientation mechanisms in the bat, which is based in the bouncing of sound emissions on the surface of physical bodies. We could also think hypothetically about a capacity of perception given by a determined technology, which makes us value our pondering to the cultural character of the objects.”

Due to this detailed description –truly very impressive— we sent a letter to our Member in Italy, Astrophysicist Dr. Massimo Teodorani, surely the scientist with more experience and knowledge about the A.L.P., which he studied in many parts of the World with the use of instruments to capture and record different parameters of the phenomenon.

Specifically, in that letter, we asked Dr. Teodorani if –according with his experience— the lights could show certain kind of “intelligence”.

His answer was: “Yes, that interaction does exist in several places of recurrence of the phenomenon. But there is not a scientific demonstration yet, but rather it comes from a collection of witnesses, including some who spoke to me personally in my area (Apennines of North Italy).  I have a very elaborate speculative theory on this which I have discussed in my last book “The Hyperspace of Consciousness” ( * ) but so far I prefer not to officialize it too much.”

Fortunately, we have a copy of his book, and the particular subject of our concern is dealt with in Chapter 14, under the title: IPH  -- the Intelligent Plasma Hypothesis

From that chapter we extract the following passages: [the subtitles are of our responsibility].

What are the Anomalous Luminous Phenomena?

“Minerals contained in some rocky areas and mountains, especially near fault lines are sometimes able to indirectly produce “luminous plasma balls” of long duration at low height. This can be due to piezoelectric effects when rocks are under stress (especially if of seismic nature) or due to effects similar to a natural battery: both geophysical phenomena have also been simulated in a laboratory.

The main physical causes producing anomalous light phenomena are, today, sufficiently well understood, but we still do not know the physical reasons why such light phenomena—often characterized by several pulsating colors—last so long: i.e. which physics governs the plasma confinement mechanism. Another mystery: sometimes light balls acquire geometric shape. In several studies conducted by some researchers, including this author, it has been possible to build up a clear empirical and observational picture.” (page 197).

Interaction with the brain

“The possibility that our mind is occasionally connected with plasma balls can be proven or disproven scientifically. In order to do this we should monitor simultaneously both the plasma ball, using measurement instrumentations, and the brain of a persona using EEG. If then we aim a Laser beam at the plasma ball and we see simultaneously a reaction from the ball itself (such as a sudden change of its light intensity, color and pulsation rate) and from our brain (such as a sudden change of the amplitude ratio between Alpha, Beta, Delta and Theta waves), then we would surely have proof that the two (supposedly quantum) objects are related. If the repeatability of such an experiment could be verified then we’d be looking at a scientifically proven reality, whose manifestations could be investigated later in greater detail.........”

“Another point of great interest, which has been often experienced, is a synchronicity phenomenon between an observer and the apparition of anomalous light forms in the sky. This occurred to scientists, too. For instance to the group directed by physicist Harley Rutledge in 1973-1980 when he was scientifically monitoring a recurrent light phenomenon occurring in Piedmont, Missouri, USA. Rutledge himself experienced synchronic event many times, and if I must be honest and sincere this happened to me, too, 15 years ago. It happens that we suddenly turn our sight to a specific point of the sky and there see the (generally star-like) light.

This is a clear example of synchronicity..........The question here is: who or what triggers this and why? Or is this the light created as an archetypal for from our own consciousness due to reasons we don{t know yet but where, once more, a mind-matter coalescence occurs suddenly as a micro-creation effect?”  (pages 207-209).

“The level of ‘intelligence’ might strongly depend on the duration of such luminous phenomena, during which light balls might replicate or multiply and replicate, following the same modality as the one found by Tsytovich et al. in the course of their computer simulations on plasma. The level of intelligence might also depend on how much energy is available to the phenomenon. Time and energy are two parameters that probably allow the plasmoid to evolve.” (page 216).

To properly study the A.L.P. they need to be captured, measured and recorded with instruments. Dr. Teodorani has a paper under the title “Physics from UFO data” giving precise details of the kind of instruments to be used. http://www.angelfire.com/va/CIOVI/Physics_from_UFO_Data.htm

Considering the relationship between the A.L.P. and witnesses, we can think about various possibilities: 1) the plasma balls electrically charged exert a direct influence on the neural brain structure, which can provoke hallucinations; 2) the plasma balls are (unconsciously) controlled at distance by the brain of the observer, and therefore, the “intelligence” they exhibit is that of the observer; 3) the plasma balls have by themselves a certain kind of intelligence shown in their movements, change of color, etc. that interact with the environment, including the eventual observers.

We encourage you to think of other possibilities and to share your thoughts with all of us.