IS IT WORTHWHILE TO CONTINUE? 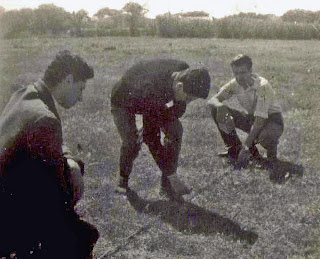 In the picture:  then Eng. Rubens Freire Ferrero, currently Ph.D in Astrophysics, Germán S. Vázquez --author of this article-- and Astronomy amateur Dante Joaquín Moscatelli, all of them members of C.I.O.V.I. working on a field measuring a presumed UFO trace (in reality produced by mushrooms).

Recently, someone asked me what was the reason for me to still continue being interested in the UFO issue and why I used part of my time to read about it, investigate presumed observations, analyze pictures, write some articles, etc. after so many years and having into account that until now I have not “discovered” anything truly interesting...

This person really made me think about his question and I asked myself if it was worthwhile to continue.

Many things came to my mind.

Years that I have been studying and investigating cases, many times “in situ”.

Many hours of trips by land, air or sea, to reach the places where it was reported that something strange has been observed...

Unforgettable moments shared with endearing companions, some of whom are no longer with us and that gave their uninterested contribution to the study of the subject.

All begun there in 1958, and along the time I have been able to discover very interesting things, maybe different that the ones I would have liked to verify.

The task gave me a knowledge that I didn’t have before, it make me grew up in that sense and fundamentally my small contribution, together with that of my companions, helped to put the subject in fair terms.

In certain way it could be said that we were pioneers dealing with the subject seriously and under scientific basis.

We never disengaged from that way to proceed.

But the task is not finished.

There are still things to be solved, cases to be explained and fundamentally people to be educated about certain facets of the subject.

It seems that this latest thing is something that must be done permanently.

If I, --like many other people seriously dedicated to these tasks-- gave them up, who is going to deal with them?

It would be to let the field free to the speculators, fantasizing of fanatic proponents of the –so far—undemonstrated hypothesis of the extraterrestrial origin of UFOs, or –as those currently dedicated to the subject prefer to call them—Unusual Aerial Phenomena.

Personally I am not thinking to leave the issue in the hands of those individuals and I will continue to do as much as I can on this that, more than 50 years ago, I decided to study. Even as an homage to those who gave a lot to unravel the mystery without asking anything in return.

It is the least I can do.

Fortunately there are other people that think like I do.

And, yes! It is worthwhile to continue.