Maybe we are alone in the Universe 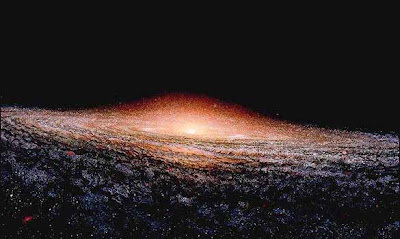 Are we alone in the universe? Well, maybe

New analysis may crush optimism of those searching for extraterrestrial intelligence**

Scientists engaged in the search for extraterrestrial intelligence (SETI) work under the assumption that there is, in fact, intelligent life out there to be found. A new analysis may crush their optimism.

To calculate the likelihood that they'll make radio contact with extraterrestrials, SETI scientists use what's known as the Drake Equation. Formulated in the 1960s by Frank Drake of the SETI Institute in California, it approximates the number of radio-transmitting civilizations in our galaxy at any one time by multiplying a string of factors: the number of stars, the fraction that have planets, the fraction of those that are habitable, the probability of life arising on such planets, its likelihood of becoming intelligent and so on.

The values of almost all these factors are highly speculative. Nonetheless, Drake and others have plugged in their best guesses, and estimate that there are about 10,000 tech-savvy civilizations in the galaxy currently sending signals our way — a number that has led some scientists to predict that we'll detect alien signals within two decades.

Their optimism relies on one factor in particular: In the equation, the probability of life arising on suitably habitable planets (ones with water, rocky surfaces and atmospheres) is almost always taken to be 100 percent. As the reasoning goes, the same fundamental laws apply to the entire universe, and because those laws engendered the genesis of life on Earth — and relatively early in its history at that — they must readily spawn life elsewhere, too. As the Russian astrobiologist Andrei Finkelstein put it at a recent SETI press conference, "the genesis of life is as inevitable as the formation of atoms."

But in a new paper published on arXiv.org, astrophysicist David Spiegel at Princeton University and physicist Edwin Turner at the University of Tokyo argue that this thinking is dead wrong. Using a statistical method called Bayesian reasoning, they argue that the life here on Earth could be common, or it could be extremely rare — there's no reason to prefer one conclusion over the other. With their new analysis, Spiegel and Turner say they have erased the one Drake factor scientists felt confident about and replaced it with a question mark.

While it's true that life arose quickly on Earth (within the planet's first few hundred million years), the researchers point out that if it hadn't done so, there wouldn't have been enough time for intelligent life — humans — to have evolved. So, in effect, we're biased. It took at least 3.5 billion years for intelligent life to evolve on Earth, and the only reason we're able to contemplate the likelihood of life today is that its evolution happened to get started early. This requisite good luck is entirely independent of the actual probability of life emerging on a habitable planet.

"Although life began on this planet fairly soon after the Earth became habitable, this fact is consistent with … life being arbitrarily rare in the Universe," the authors state. In the paper, they prove this statement mathematically.

Their result doesn't mean we're alone — only that there's no reason to think otherwise. "(A) Bayesian enthusiast of extraterrestrial life should be significantly encouraged by the rapid appearance of life on the early Earth but cannot be highly confident on that basis," the authors conclude. Our own existence implies very little about how many other times life has arisen.

Two data points rather than just one would make all the difference, the researchers say. If life is found to have arisen independently on Mars, then scientists would be in a much better position to assert that, under the right conditions, the genesis of life is inevitable.

**The article reproduced here is only for educational purposes.