COULD THEY HAVE BEEN FLARES? 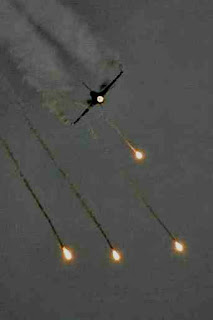 F-16 ejecting flares
Soon after the first news came from Stephenville, Texas, about new sightings of apparently strange lights in the sky, I tried to gather as much information as possible.

A press article published by the local newspaper, and the text of a writer about paranormal issues, in a blog, helped me to know a little bit more about what happened and what people have seen.

Of course, nothing substitutes an immediate investigation done “in situ”, talking separatedly with each witness, taking angular measurements, and re-enacting the event so that it also could be timed.

This no one has done so far, although MUFON investigator announced that will be there, as they went when something similar happened on January of this year also over Stepehnville.

But after seeing on a documentary the way the MUFON investigators do their job, I bet that they will conclude that something extraordinary happened on October 23, in the skies of Stephenville.
No doubt whatsoever that many people saw lights in the sky.
Now, about the nature of those lights and the possible speculation about their strangeness, this is a different matter.

But I have to say that either different sets of people saw different things at almost the same moment, or, some of these people have been confused because of their perspective, or their imagination have played a considerable role.
The writer Bill Knell in his web page Www.opednews.com recounts what happened:


Monrreal’s parents also saw the object and his father commented, "I never seen nothing like that in my life… big lights and everything." His mother said, "It was a round thing. You could see lights around it, flickering and changing. It was awesome. Just turning and flickering.” A total of eleven witnesses reported seeing the same object and many confirm that military jets were in the area at the same time.In what seems like a rerun of the original events that brought so much attention to Erath County back in January, the Joint Reserve Base in Fort Worth confirms that at least seven F-16s were training in the area at the time the object was observed. However, these training exercises were not announced in advance and the area where the UFO and the jets were seen is not airspace generally reserved for training. >

According to Topix, (October 29) a local press source:

"These don't look like conventional flying lights of any kind," said Jay Miller, an aviation photographer who has snapped hundreds of aircraft from various angles all over the world.Taking a look at the video, Miller said he doesn't believe the lights depict an F-16."I'm not saying this isn't an airplane, but the arrangement [and] color, what have you, isn't what I would consider normal for a fixed-wing plane," he said.Some witnesses also reported seeing flares."I'm very familiar with flares and they would react much differently than this," he said.
Although Miller said he is puzzled by the lights, he said they did leave him with one overriding impression."They don't look extraterrestrial to me," he said. "They look very much manmade”>

In the midst of possible speculations, it is good that –contrary to what happened decades before— now people think in terms of human technology.

But there is more.

Whitney White-Ashley, staff writer of the “Empire Tribune” of Stephenville, wrote the following on October 30:

Bell said she saw lights on the horizon last week and again on Tuesday when she went outside to feed her dogs shortly after 8 p.m.“I have gotten into the habit of scanning the sky because of what happened last week,” Bell said.She saw an objet on the horizon to the southwest.“I watched it briefly, it was large (I was seeing it from far off), it had a definite red glow and had a faint strobe effect with a whitish blue light emitting around it,” Bell said.Bell and her boyfriend used a high power rifle scope to get a closer look.“We could clearly see an oval or round object that had a red glow, it pulsated,” Bell said. “Whatever this was, it was big because we were seeing it from a great distance from where it actually was.”The object looked more orange through the scope. The object would occasionally throw a white or blue light.“We really could not believe our eyes. It finally just looked like it disappeared over the horizon (or lowered itself to a point we could not see) at exactly 8:33 p.m.,” Bell said.Stephenville residents also caught glimpses of the lights.Junior Chacon was in the HEB parking lot around 7:45 p.m.Tuesday when he saw something in the sky towards Dublin that looked like a large star.Then he noticed two sets of three lights that would turn on and off; they would move apart and then come back together.He said there were about eight other people, including customers and employees, standing in the parking lot and watching the lights.Clinton Holland was driving down Lingleville Highway with his friend Aaron Adams around 7:40 p.m. on Tuesday when they, and several other cars, pulled over to watch some lights they noticed on the horizon.Adams said it started as a single bright light sitting just above the power lines and was headed toward Dublin. He had a hard time telling if the light was blinking, or if the power line was obstructing his view.Holland said he soon noticed multiple lights, but couldn’t tell exactly what was happening. Lights kept “dropping” and disappearing, but he didn’t know if something was actually falling from the sky or if the lights were rotating around an object.Tarena Major was on Highway 377 in Stephenville when she made her husband pull over. They had noticed a bright light.“I saw a big light that was kind of low, like a star,” Major said.Shortly after two smaller lights appeared on both sides of the large bright light, then they disappeared.”“It was a big light show, but definitely not airplanes,” Major said.Many people are still searching for or offering explanations for the big light show. Some believe they are intergalactic visitors, while others think they are top-secret military flight-tests.>

Two points as a general comment: I find very significant and important what the witness Mr. Clinton Holland said: a) lights kept dropping and disappearing; and b) he didn’t know if something was actually falling from the sky or if the lights were rotating around an object.

About “lights dropping and disappearing”, it sounds like flares as a possible explanation.

While the question about if it was something falling from the sky or rotating around an object, tends to be more an interpretation of what possible was happening, and it adjusts more to a pattern or psychological “gestalt” from the part of the witness.

This extended duration would put totally out of consideration the possibility of flares.

Nevertheless, there is still room to consider observations of different things. There are people who speak about a shining light very low and like a star. It could have been a star or a planet, but neither elevation angle or cardinal direction is given.

On the other hand, seen a bright light and few minutes later two smaller lights at each side, make us think of an airplane seeing coming in the perspective of the witness and suddenly making a turn and apparently disappearing.

And above all, we have to take into consideration that on the date and during the time frame the witnesses saw lights in the sky, there were F16 military jets performing training maneuvers on the area.