THERE WAS A BALLOON NAMED “GREAT EXPECTATIONS” but ended punctured... 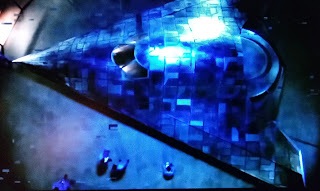 All the noise created by individuals avid to make money with the UFO subject, now re-baptized as UAP, and those that follow them blindly believing that aliens are here, were left stupefied….

1) within a Law that allocate millions of dollars to the Defense of the United States, a group of just six pages deals with the investigation and study of UAP reports

2) The organization created by the Law to deal with this subject should start working on June 2022, that is six months later. And the first report is expected to be produced “no later than October 31, 2022”.

In specific and concrete terms, this is like saying to the enthousiasts, to those who expected some sensational revelations, “calm down!”. There is no reason to be on a hurry.

In the meantime, they should think and think again on the definition of UAP,      because the Law says that it is something "not immediately identifiable" which means (a): that the main task consists to identify them, and (b): that they will not remain unidentified forever.

In other words, there are not objects or manifestations of energy that are intrinsically unidentifiable.

Following this criteria, the UAP could belong to the categories of Airborne Clutter, Natural Atmospheric Phenomena, U.S. Government or Industry Development and Programs, Foreign Adversary Systems, and Other.

Arrived to this point, we feel the obligation to mention a very important  document  that was SECRET for many years until it lost its 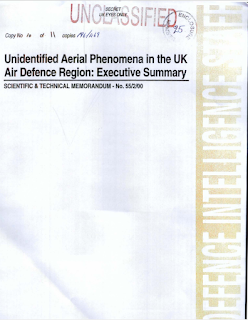 classification and was made public. It is the Unidentified Aerial Phenomena in the UK Air Defence Region: Executive Summary –Scientific & Technical Memorandum / No. 55/2/00.

A document hard to obtain now, but that I got it as soon as it was publicly announced, I read it, summarized it and translated into Spanish its principal parts and concepts which I wrote as an Appendix in my book  “OVNIs: La Agenda Secreta” – “UFOs: The Secret Agenda”.

Although its Introduction was done on February of 2000, the document was not circulated among the people for  which it was written until December of the same year under the classification of “SECRET – UK EYES ONLY – UK RESTRICTED”.

Finally, the document became declassified and was made public on May 15, 2006.

This Executive Summary contains 464 pages. It begins with an Introduction, an explanation of the Study Method and this is followed by a SUMMARY OF FINDINGS.

We recommend to read carefully what follows.

“Based on all the available evidence remaining in the Department (reported over the last 30 years), the information studied, either separately or corporately contained in UAP reports, leads to the conclusion that it does not have any significant Defence Intelligence value. However, the Study has uncovered a number of technological issues that may be of potential defence interest.”

“Causes of  UAP Reports. In the absence of any evidence to the contrary, the key UAP report findings are:

·        Mis-reporting of man-made vehicles, often observed by perfectly credible witnesses, but with unfamiliar or abnormal features; or in unusual circumstances.

·        Reports of natural but not unusual phenomena, which are genuinely misunderstood at the time by the observer.

·        The incidence of natural, but relatively rare phenomena. These may be increasing due to natural changes and possibly accelerated by man-aided factors, such as smoke and dust.

·        No evidence exists to associate the phenomena with any particular nation.

·        No evidence exists to suggest that the phenomena seen are hostile or under any type of control, other than that of natural physical forces.

·        Evidence suggests that meteors and their well-known effects and, possibly some other less-known effects, are responsible for some UAP.

The overall analysis, which has included an examination of reports received during the Cold War, indicates that:

·        There is no evidence that any UAP, seen in the UKADR, are incursions by air objects of any intelligent (extra-terrestrial o foreign) origin, or that they represent any hostile intent.

·        There is no evidence that “solid” objects exist which could cause a collision hazard.

Key recommendation  -  Although the study cannot offer certainty of explanation of all UAP phenomena, the existing evidence is sufficient persuasive to make one key and 4 subsidiary recommendations.

·        It should no longer be a requirement for DI55 to monitor UAP reports as they do not demonstrably provide information useful in Defence Intelligence. Therefore, Hd Sec (AS) should be advised.

We think the military American authorities should know this document. Instead, the legislators possibly do not.

It would be surprising if at the end of 2022, the AOIMSG (Airborne Object Identification and Management Synchronization Group) arrives to different conclusions.

It does not escape to our consideration that there are sixteen years of difference between the publication of this Study by the Intelligence of the United Kingdom and the future discoveries and recommendations that could come out from the American study.

We are aware of the continuity of UAP reports happened in the UK that are collected by the Ministry of Defence and are part of the National Archives of that country.

They imply thousands of pages that –honestly— I have no time to read, but I can give you a summary of the amount of cases being in those Archives.

To give you an idea of how the MoD sees he UAP subject and where is the interest to know what the people say about what they see, nothing better than share with you a video recorded by Dr. David Clarke, an expert in UFO history that belongs to the Sheffield Hallam University in England.

Also, there is a Podcast very explicit and clear, recorded by Dr. Clarke:

Returning to the United States and the official investigation, due to the given established deadlines, we will wait calmly the news that eventually would emerge from the AOIMSG, and we suggest everybody to do the same.