A SURVEY AMONG U.A.P. INVESTIGATORS AND SCHOLARS - Part XXI

It is a wonderful experience to get the opinion of a very selective group of people at an international level and get them together giving answers to just 8 questions referred to the Unusual Aerial Phenomena.
We give a big thanks to all those colleagues who are answering our survey and we are very pleased to present to you their ideas. We hope that what they say would be useful to you in your own work with the U.A.P. and that their criteria would help to shape your own one.
We continue today the publication of the answers of these colleagues, and we are doing so in the order they were received. 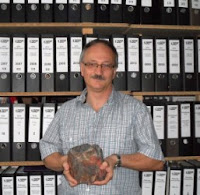 Hans-Werner Peiniger (Photo: Hans-Werner Peiniger with an iron-meteorite in front of the GEP-sighting-archive)
born in 1957, technical employee in a telecommunications company. Peiniger has been interested in the UFO phenomenon since his childhood. In the beginning, he himself saw numerous UFO phenomena that seemed inexplicable to him at the time. Adhering to an almost religious faith in UFOs, he also sat at the window at night and sent rhythmic flashlight signals to the – but the hoped-for answer by extraterrestrial visitors failed to appear.
In order not to limit himself to the study of ufological literature, he founded the “UFO-Jugendclub Lüdenscheid” in 1972 and began to collect UFO sightings by others and became acquainted with the optical appearances of conventional aircraft and natural phenomena. He soon understood that a large number of sightings could be traced back to conventional causes. Not only did more and more spectacular UFO sightings turn out to be due to terrestrial phenomena and thus explainable, he also found many known UFO photos could be identified as forgeries. These facts, sobering as they were for him as a former believer in UFOs, made him a critical UFO researcher who wanted to get to the root through witness interviews and field investigations.
Peiniger is chairman of the “Gesellschaft zur Erforschung des UFO-Phänomens (GEP) e.V.” founded in 1984 (www.ufo-forschung.de/. He is also author of numerous specialist articles on UFO research, co-editor of the journal “Journal für UFO-Forschung (jufof)” (www.jufof.de), published by the GEP e.V., and specializes in the research of UFO observations with a focus on witness interviews and field investigations. He is author of the book “Das Rätsel: Unbekannte Flugobjekte”, Rastatt 1998, ISBN 3-8118-1393-5. Source: https://de.wikipedia.org/wiki/Hans-Werner_Peiniger


Today, the term UFO has a negative connotation, although it comes from American aviation terminology. It is often equated with “extraterrestrial visitors” by people and in the media.
I use the term nevertheless, because it is still very much in use and has ultimately become the word for the subject we are dealing with. It is also important to offer an alternative to UFO esoterics and UFO believers, and it is necessary to use the same terms.

When I started to deal with UFOs at the age of 15, I was convinced that the earth is visited by an extraterrestrial intelligence and that UFOs are their space vehicles.
After over 45 years of research and over 4000 investigated UFO sightings from German-speaking countries, I take a critical view. I now think that we currently have no evidence for a visit by aliens. Nevertheless... we have some unresolved cases which are suitable for further scientific investigation and we should pay more attention to these cases.

A UFO investigator must have sufficient knowledge of IFOs. This is a basic prerequisite for being able to investigate UFO cases at all.
The UFO phenomenon is almost drowned by a large number of UFO cases. With the appropriate IFO knowledge, these could have been filtered out in advance.

We have analyzed the unsolved GOOD-UFO cases of the GEP (www.ufo-forschung.de) and found no common anomalous features (https://www.ufo-forschung.de/shop/product_info.php?products_id=35&MODsid=mrak4jce4sid3kbah1ptechok7). Personally, I do not see any evidence for extraterrestrial visitors or any other exotic explanations in these cases.

This cannot be explained in a few sentences.
It is exciting to deal with the topic scientifically. I am personally attracted by the detective work and the involvement with various scientific topics.
In my opinion, the UFO phenomenon is influenced by sociological and cultural factors. It is in part also influenced by the media, and has developed into a myth. Nevertheless, it is worth investigating. We have formulated numerous research questions that show that there is still a lot to learn about the UFO phenomenon or the UFO myth: https://www.ufo-forschung.de/forschung/grundkonsens-der-ufo-forschung

Sometimes one feels one's own work is like Don Quixote's fight against the windmills. The belief in aliens and the corresponding uncritical thinking have spread to such an extent that a comprehensive clarification is no longer possible. Most people also do not want explanations, they only seek confirmation of the eccentric view of the world they have read in books. Conspiracy theories are more exciting than solved UFO cases. Nevertheless... I see it as my task to separate the wheat from the chaff and, in case I am asked, to give an appropriate answer. Either you accept the assessment of an experienced UFO researcher or you don’t. I am not a missionary.

Yes, these are certainly important research projects. The interesting thing is that amateurs worldwide can participate in the SETI project via their software. But such projects have nothing to do with the actual UFO research. These projects deal with the possibility of extraterrestrial life in space. In UFO research, on the other hand, we ask ourselves, among other things, whether the UFO event described by an eyewitness or the UFO photo presented by a witness can be traced back to an extraterrestrial influence.

This is one idea among many others. Cosmological questions are not one of my core topics. They do not help us in UFO research either. They are in the domain of astrophysics.