A SURVEY AMONG U.A.P.S. INVESTIGATORS AND SCHOLARS - PART XVII 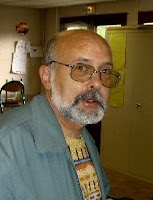 Born 1946, teacher in maths and physics in a vocational school (retired); studies in physics and (because of UFOs) in psychology.

Interested in UFOs since 1974, virtually in all aspects of the problem.

Some 35 contributions in various UFO medias. Currently preparing a catalogue of abductions in France and an annotated bibliography of UFO books in French.


1) Do you use the acronym UFO or another designation, and if so, why?
Use of acronym UFO (and ovni in French): Yes; because both it's now a common term and it can have a rather broad meaning. But whenever it's necessary to be more precise, I distinguish: 1° pre-ovni (pre-UFO) = any stimulus, objective or not, which someone labels "UFO"; 2° quasi-ovni (quasi-UFO) = unidentified after close scrutiny; 3° vrai-ovni (true-UFO) = the still hypothetical stimulus (stimuli) which is (are) not only not yet acknowledged by our science but which would revolutionize it (e.g. extraterrestrial spacecraft).


Change of idea about UFO: yes, around 1980/82, from a reasonable conviction in the existence of true-UFOs (E.T. craft) to a strong skepticism.

UFO investigator expert in IFOs: "Expert" is probably a term a little too strong, but he/she indeed needs a serious knowledge of them. In the contrary, mundane stimuli will be labeled "UFOs", as the literature (old or current) shows in profusion.

Nature of possible unexplained phenomena: Possibly various, but my opinion is that the ETH is the best way to account rather "economically" for an hypothetical fully abnormal phenomenon (most alternative hypotheses are far less economical -- e.g. see 8 -- or event totally irrational).

The whole subject of UFOs: An intellectually formidable puzzle, and in any case an important sociological matter. And of course a major problem for mankind if the ETH would be the right one.

Possibility of education of "believers": For those for whom UFOs = $$$, no; for conspirationnists, no more; for reasonable people, probably for a part of them, by a progressive personal process.

SETI as a valid activity: A priori, yes; the question is: after several decades of unsuccessful results, when will it be reasonable to stop the quest? [But this applies too to pro-ETH ufologists...].

Multiple universes: Basically, a concept valid in mathematics; but in the physical world, nobody knows. As a possible explanation for true-UFOs: apart the problem of their mere existence, another big question arises: how can they interact with our own spatio-temporal continuum?

Next publication: answers from Edoardo Russo, Italian investigator.
Posted by Milton at 10:28 AM