THE IDEAS DEVELOPED BY UFOLOGISTS IN THE SIXTIES 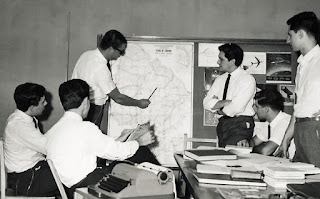 The field of Ufology has changed so much in few decades, that today it is near unrecognizable compared to what it was before.

Today there is a hard confrontation between the believers in ET --thinking they are here operating on Earth-- which is in itself an expression of faith and will; and those that objectively and applying the scientific method investigate and study the subject just motivated for the love of truth.

Aside this two tendencies, there is a by-product of the alien idea: the commercial exploitation more or less sophisticated that certain well identified individuals develop in different countries. Photos, videos, web pages, publications, radio and TV programs, tourism to “special places” and congresses pompously announced, they do all these things. The common thing among them is the use of faked material and disinformation, and of course, to make as much money as they can. This simple deserves rejection and repudiation.

Of course, this kind of circus or carnival is the most visible part of the present Ufology.

As a consequence of this, and the gross confusion that lead people to think that UFO means extraterrestrial artifact, official and private organizations as well as individuals prefer to use the acronym UAP, for Unidentified Aerial Phenomena, or Unusual Aerial Phenomena.

Coming from the Ufological carnival are the ideas of exopolitics, teleportation, telepathic communications and messages, trips to other worlds, messengers, and more recently the search for ancient aliens and the exhumation of corpses and mummies pretending they belong to aliens, which so far has failed miserably.

What about the people dealing with the UFO subject in the sixties? Which were the ideas, which was the mystery surrounding the issue and the search for answers?

What I am going to describe was the situation that we lived in South America, and more specifically in Argentina, Brazil and Uruguay. The details of this situation comes from the correspondence exchanged at that moment in history, as well as the publications produced by different private organizations and the personal encounters among some of the investigators.

I do have to honestly recognize that at that time we were  totally subsidiary of the ideas and tendencies in the U.S.A., mainly coming from Donald Keyhoe’s National Investigation Committee on Aerial Phenomena (NICAP) –which later was discovered was a CIA operation--, and the individual initiative of Jim and Coral Lorenzen with their Aerial Phenomena Research Organization (APRO), as well as the very influential Keyhoe’s book “Flying Saucers from Outer Space”, that was known in Spanish as “Platos Voladores de Otros Mundos”. When I read this title now, it sounds ridicule.

Keyhoe was persuasive and a person who argued very well. Besides, NICAP has many military and scientists in its files, which made it a compelling source of information.

Based on to the description of hundreds of cases, we tried to pick-up and define some characteristics of the UFOs. They have to do with their maneuverability, shapes, sizes, speeds, etc.

The Directive Counsellor of C.I.O.V.I., Mr. Dante Joaquín Moscatelli, --who was also a member of the Amateurs Astronomers Association of Uruguay, performed with the great amount of data available at that moment, an outstanding job: the first and only computerized analysis in Latin America of those UFO characteristics.

Things that challenged our explanation were:

a) the material used in those artifacts, always described as shining metal without rivets;

b) their shapes, round in general, rather flat, but also long objects described as “cigars” to which was attributed the capacity to be mother-ships;

c) their level of operation: the small objects flying low, the big ones flying high and never low;

d) their numbers: in the vast majority of cases there was only one small object, but there were cases in which there were two, three and sometimes until nine –like in the Arnold case.

e) The way they fly: they fly in formation, and they show the same alteration in their flight when they go one behind the other through the same area in the air, like for instance, a jump;

f) the repair in the air: when one of the small objects has a trouble to keep safely on the air, flying or stationary, they usually wobble on axis. Then another object shows up to help. To do so, first it places itself at a short distance on top of the object in trouble, until this is stabilized. Once that stage is reached, the object that came to help takes distance and levels its height with the first one, and then they start a kind of dance, where they approach each other and take distance, each time the approach is lesser and the distance greater, until each object separates quickly in the opposite direction of the other and they disappear from sight;

g) the release of material: when some of these small objects is in trouble, they could stabilize themselves releasing some material that falls to the ground in melting conditions until it cools.

h) the propulsion system: at that time, I developed the idea of a unified energy system. According to this system, the big crafts would be the generators of a certain kind of energy that was taken by each small object and used to fly. The small objects don’t have engines, they capture the energy that is sent to them. Probably they use electro-magnetism, which explains how they are repaired and why once they get all the needed energy to become autonomous, they repel each other and separate in opposite directions. That also explains why they are silent or it could be heard just a buzzing-sound.

i) unmanned aircrafts: the high speeds they are able to reach and particularly the sudden maneuvers they can perform allows to think that they are guided at distance, they don’t have a crew.

These were the ideas that we exchanged and discussed in the sixties, considering UFOs.

Currently, the fantasy has substituted this more “down-to-earth” approach, this more realistic vision of what the objects could be.