APOPHIS: AT 26 YEARS AND COUNTING…

This last one has raised concerns for a possible hit with our planet.

Astronomers are on alert, but currently they rely on the possibilities of better measurements done by 2013, and then take a decision about what to do.

To have a better idea about the chances of this astronomical collision and the effects on Earth as well as the plans to deflect Apophis, we reproduce here some useful information.

We are going to follow up this story, and publish updates whenever they are available.

5 Plans to Head Off the Apophis Killer Asteroid

More than 100,000 asteroids hurtle past our planet. But only one—that we know of—may hit us in the next 30 years.
By David Noland

Published in the December 2006 issue. Of Popular Mechanics

Former astronaut Rusty Schweickart, now 71, knows a thing or two about objects flying through space, having been one himself during a spacewalk on the Apollo 9 mission in 1969. Through the B612 Foundation, which he co-founded in 2001, Schweickart has been prodding NASA to do something about Apophis—and soon. "We need to act," he says. "If we blow this, it'll be criminal."

According to projections, an Apophis impact would occur somewhere along a curving 30-mile-wide swath stretching across Russia, the Pacific Ocean, Central America and on into the Atl

antic. Managua, Nicaragua; San José, Costa Rica; and Caracas, Venezuela, all would be in line for near-direct hits and complete destruction. The most likely target, though, is several thousand miles off the West Coast, where Apophis would create a 5-mile-wide, 9000-ft.-deep "crater" in the water. The collapse of that transient water crater would trigger tsunamis that would hammer California with an hour-long fusillade of 50-ft. waves.

NASA, however, is taking a wait-and-see attitude. An analysis by Steven Chesley of the Near Earth Object program at the Jet Propulsion Laboratory (JPL) in Pasadena, Calif., concludes that we can safely sit tight until 2013. That's when Apophis swings by Earth in prime position for tracking by the 1000-ft.-dia. radio telescope in Arecibo, Puerto Rico. This data could also rule out a keyhole hit in 2029. But if it doesn't, the transponder mission and, if necessary, a last-resort deflection mission could still be launched in time, according to Chesley. "There's no rush right now," he says. "But if it's still serious by 2014, we need to start designing real missions."

¿HOW TO HEAD OFF AN ASTEROID?

Under this title, the issue of December 2006 of Popular Mechanics published a diagram of the 5 possibilities to avoid a collision of the asteroid Apophis with the Earth. 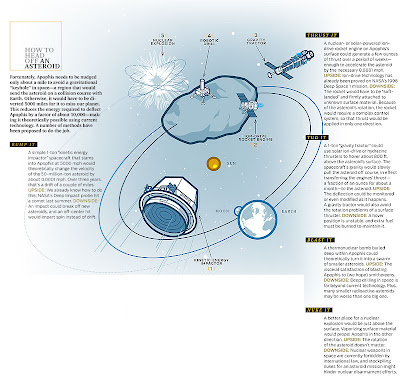 
Russia may deploy defensive spacecraft against the Apophis asteroid, which is almost certainly not going to hit the Earth, according to remarks by the head of the country's space agency.

"I don't remember exactly, but it seems to me it could hit the Earth by 2032," said Anatoly Perminov, quoted by AP.

In this Perminov is technically correct. Apophis is set to pass close by the Earth in 2029 - so close that it will be nearer than television satellites in geosynchronous orbit. Collision at that stage has been ruled out, but according the latest NASA analysis there is a remote chance - 1 in 250,000 - that the 27-million-tonne rock might pass through a so-called "keyhole" during the 2029 pass which would alter its course so as to hit us on the next pass, in 2036.

"People's lives are at stake," Perminov reportedly insists. "We should pay several hundred million dollars and build a system that would allow us to prevent a collision, rather than sit and wait for it to happen and kill hundreds of thousands of people."

One popular strategy for deflecting rogue asteroids is the use of nuclear weapons. Other schemes involve a shove delivered by a spacecraft, probably having only a minuscule effect on a big object like Apophis but enough that it would miss tiny Earth in the vastness of space. Yet other plans would see solar reflectors used to boil matter off from icy/carbonaceous asteroids.

Perminov refused to be drawn on the details of his Apophis scheme, though he did specify that there would be no nuclear explosions. This is probably just as well, as weapons of mass destruction are forbidden in space by international treaty.

Those sceptical of the Russian regime will see the announcements as sinister - after all, an asteroid-nudging spacecraft could just as well direct Apophis to hit Earth - perhaps chosen parts of Earth - as deflect it away. In the event of a strike, the rock would hit with energy equivalent to a 500 megaton nuke barrage.

However, conspiracy theorists can probably relax on this one. Perminov is keen to recruit other space agencies to the project, including NASA and the ESA. Observers have noted that though the effort is highly unlikely to be required in the case of Apophis, it could save us all in the event of another threatening rock coming on the scene. ®