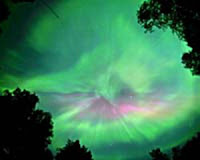 Earth-bound tornadoes are puny compared to "space tornadoes," which span a volume as large as Earth and produce electrical currents exceeding 100,000 amperes, according to new observations by a suite of five NASA space probes.

The probe cluster, called Time History of Events and Macroscale Interactions during Substorms (THEMIS), recorded the extent and power of these electrical funnels as the probes passed through them during their orbit of Earth. Ground measurements showed that the space tornadoes channel the electrical current into the ionosphere to spark bright and colorful auroras on Earth.

The findings were presented during a press at the general assembly of the European Geosciences Union (EGU) in Vienna, Austria.

Space tornadoes are rotating plasmas of hot, ionized gas flowing at speeds of more than a million miles per hour, far faster than the 200 m.p.h. winds of terrestrial tornadoes, according to Andreas Keiling, a research space physicist at the University of California, Berkeley's Space Sciences Laboratory.

Keiling works on THEMIS, which was built and is now operated by UC Berkeley. The five space probes were launched by NASA in February 2007 to solve a decades-long mystery about the origin of magnetic storms that power the Northern and Southern Lights

Both terrestrial and space tornadoes consist of funnel-shaped structures. Space tornadoes, however, generate huge amounts of electrical currents inside the funnel. These currents flow along twisted magnetic field lines from space into the ionosphere where they power several processes, most notably bright auroras such as the Northern Lights Keiling said.

While these intense currents do not cause any direct harm to humans, on the ground they can damage man-made structures, such as power transformers.

The THEMIS spacecraft observed these tornadoes, or "flow vortices," at a distance of about 40,000 miles from Earth. Simultaneous measurements by THEMIS ground observatories confirmed the tornadoes' connection to the ionosphere.

Keiling's colleagues include Karl-Heinz Glassmeier of the Institute for Geophysics and Extraterrestrial Physics (IGEP, TU) in Braunschweig, Germany, and Olaf Amm of the Finnish Meteorological Institute.