The ways the official investigation on UAP takes in the United States are nearly unpredictable.

We need to find an explanation for a substantial change not only in the name but in the purpose of the new entity to deal with the subject.

A couple of things caught our attention: since the creation of the AOIMSG and now with the substitution of this Group by the Office named AARO, the acronym UAP disappears in their names.

The second thing, even more important and significant: the order imparted to “disestablish the Unidentified Aerial Phenomena Task Force (UAPTF) no later than the date the AARO is established”.

We thought  that  the creation of the AOIMSG determined the end of the UAPTF, but  evidently this was not the case.

What could have precipitated this clear decision to “disestablish the UAPTF”?

The UAPTF was a creation of the US Navy.

In the meeting with Representatives at the Capitol on May 17, 2022, the Deputy Director of Naval Intelligence, Scott Bray showed lawmakers what appeared to be a new UAP video not previously released to the public. And after showing the video taken by a pilot from the cabin of his airplane, Bray said: “we don’t know what it is”.

It is possible that such video was in the UAPTF files but not in the AOIMSG files?

Worst of all, Commodore (Ret.) Rubén Lianza, Director of the Center for Aero-Space Identification (CIAE) that belongs to the Argentinean Air force identified and explained the object as “a helium balloon with the thread still hanging below”. He just was able to arrive to that identification using the software program IPACO.

We tend to think that this episode could have precipitated the decision to “disestablish the UAPTF”.

The other thing to point out is that in the AOIMSG acronym as well as the new AARO acronym, there is no mention to UAP. And we find this very significant.

The new jargon employed define the issue to deal with as “anomaly”.

Here is the order imparted by the Deputy Secretary of Defense,
KATHLEEN HICKS dated on July 15, 2022. 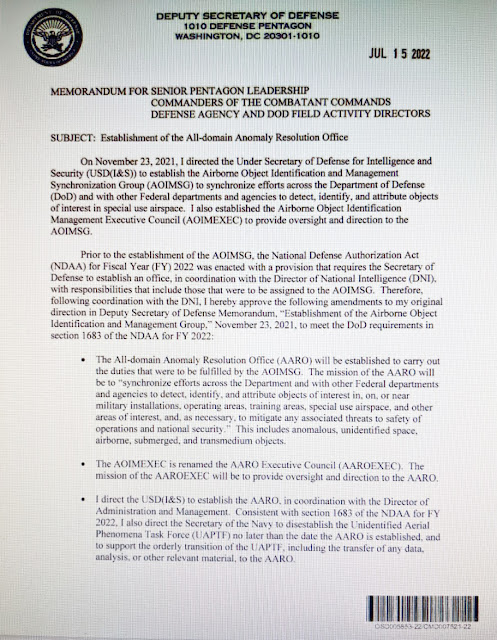 And following that order, here is the implementation of it determined by the Under Secretary of Defense, ROBERT S. MOULTRIE, dated on July 20, 2022. 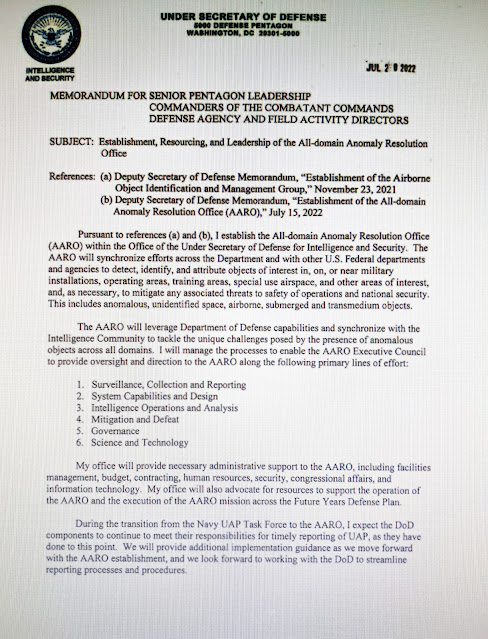 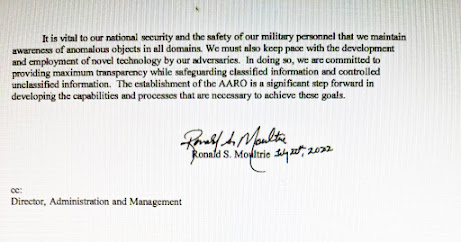 Finally, a very important declaration made public after a question posed by a journalist of the newspaper The Washington Post, on a roundtable with reporters at the Aspen Security Forum. 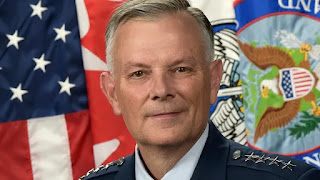 The Commander of the North American Aerospace Defense Command (NORAD) and the U.S. Northern Command (NORTHCOM)  U.S. Air Force General GLEN D. VANHERCK said: “If any of our NORAD fighters, or any assets assigned to NORTHCOM, came across some type of UAP, we would absolutely report that” and added: “I’m just telling you, we haven’t seen that.”

We will keep alert to any news emerging from the AARO. In the meantime we expect the official report to be presented to the legislators on October 2022.