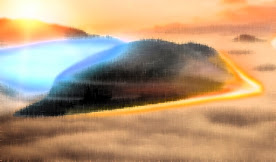 The third millennium started with silence about UAP activity, exception made by the fringe of people that could look at the sky and get confused by optical, meteorological, astronomical phenomena and technological developments, and those that experts in psychology qualify as fantasy-prone personalities.  They continue producing UAP reports, but the media and the general public were not concerned about the subject.

Behind the scenes, a group of individuals moved by different but coincidental interests (political, influential, economic)  pushed the UAP subject by reaching two major newspapers: The New York Times and The Washington Post. Both of them were chosen to reveal on April 27 of 2017 a couple of videos that initially escaped the control of the Pentagon.

The Pentagon was forced to recognize those videos taken through infrared cameras, not knowing exactly how they escaped to their control. The DoD said that they were “authentic”, not in the sense that they showed the existence of strange crafts flying near US Navy airplanes, but that they were not the elaborated result of tricks or the use of Computer Generated Imagery.

Behind the scenes appeared 22 million dollars approved by the Senate of the United States and supposedly given to the Pentagon to finance a program that would study the UAP, but that went mostly to Robert Bigelow, an eccentric owner of a chain of hotels and a company named “Bigelow Aerospace”.  The multimillionaire was an important donor to the political campaign of who was then the Senate Majority Leader, Harry Read.

But there appeared some other names that were pushing the UAP subject like Christopher Mellon (a former Deputy Assistant Secretary of Defense for Intelligence in the Clinton and George W. Bush administrations and later for Security and Information Operations), John Ratcliffe,( former Director of National Intelligence under President Donald Trump) Helene Cooper, Leslie Kean and Ralph Blumenthal (journalists pro-E.T.) and on a lower level but very active, Luis Elizondo a former Pentagon employee that never directed any project related to UAP, Jeremy Corbell (filmmaker specialized in showing faked “ufos”) and the rocker Tom DeLonge, (founder of To The Stars- Academy of Arts and Science).

All these people made a lot of noise using the media.

And these people got it! To the point that the Department of Defense created an Unidentified Aerial Phenomena Task Force (UAPTF) that is the one responsible for the Report presented to the Intelligence Committee of the US Senate.

The creation of this Task Force and the announcement that it would have to present a report to the Capitol determined that those believers in extraterrestrials felt like a push to their position, developing exaggerated expectations about what the report would say.

Of course, once the report was known their reaction was one of great disappointment.

To us, this shows that they live in an environment of fantasy that doesn't allow them to think rationally and with feet on the ground.

What is needed to understand is that –in the existent relationship between institutions of the Government— the request of a report, and the presentation of it, is a bureaucratic procedure.

The subject of the report could attract attention –obviously— but not to the point of going beyond reasonable boundaries.

The Report starts by saying that it “is to submit an intelligence assessment of the threat posed by unidentified aerial phenomena (UAP) and the progress the Department of Defense Unidentified Aerial Phenomena Task Force (UAPTF) has made in understanding this threat.”

Just in one initial phrase the word “threat” appears twice. And the second paragraph speaks once again about “the potential threat posed by UAP”.

Even further, in the same tenor, the report goes so far as to say: “UAP would also represent a national security challenge if they are foreign adversary collection platforms or provide evidence a potential adversary has developed either a breakthrough or disruptive technology.”

Moreover, in a sub-title, the Report says: “UAP THREATEN FLIGHT SAFETY AND, POSSIBLY, NATIONAL SECURITY”  and explains: "UAP pose a hazard to the safety of flight and could pose a broader danger if some instances represent sophisticated collection against U.S. military activities by a foreign government or demonstrate a breakthrough aerospace technology by a potential adversary.”

We deduct that, on the one hand, the real concern of the Department of Defense is to tackle this threat, --based only on military pilots reports— and on the other hand, there couldn’t be possible a more persuasive argument to the legislators to get the approval of money for the investigation than talk about a threat, and suggesting that the national security is at stake.

In other words, this report is used to ask for money.

The Report is based on the consideration of incidents reported between “November 2004 to March 2021” although it adds that “Data continues to be collected and analyzed”.

This –therefore— is a very restricted period in time for a subject that goes beyond  that  little window, and it is obvious that it is mainly related to UAP reports by US Navy pilots, as the UAPTF explicitly recognizes:

“The majority of UAP data is from U.S. Navy reporting, but efforts are underway to standardize incident reporting across U.S. military services and other government agencies to ensure all relevant data is captured concerning particular incidents and any U.S. activities that might be relevant. The UAPTF is currently working to acquire additional reporting, including from the U.S. Air Force (USAF), and has begun receiving data from the Federal Aviation Administration(FAA).”

Although the reports were made by military pilots, this situation corroborates that they are not the best observers/witnesses that some people suppose. This is corroborated when the Report alludes to “observer misperception”.

The people working at the UAPTF recognized that: “The limited amount of high-quality reporting on unidentified aerial phenomena (UAP) hampers our ability to draw firm conclusions about the nature or intent of UAP.” [underline mine]

This word “intent” clearly presupposes that the phenomena considered by the UAPTF  are not only natural but artificial too.

As they say: “Our analysis of the data supports the construct that if and when individual UAP incidents are resolved they will fall into one of the five potential explanatory categories: airborne clutter, natural atmospheric phenomena, USG [United States Government] or U.S. industry developmental programs, foreign adversary systems and a catchall “other” bin”. [underline mine].

We have given opportune information about the development of hypersonic by Russia and China on the UAPSG web page –in articles published on June 4, 13 and 15.

And this is because “The UAPTF has 11 reports of documented instances in which pilots reported near misses with a UAP.”

“Most reports described UAP as objects that interrupted pre-planned training or other military activity.”

This worrisome situation is at the core of the effort to identify the reported UAP.

The good thing is that the members of the UAPTF are aware that:

“Some UAP observations could be attributable to developments and classified programs by U.S. entities”, and a paragraph later the Report says: “Some UAP may be technologies deployed by China, Russia, another nation, or a non-governmental entity.”  [subrayado mío]

About these technologies, the Report establishes that: “observers reported unusual UAP movement patterns or flight characteristics.”

“Some UAP appeared to remain stationary in winds aloft, move against the wind, maneuver abruptly, or move at considerable speed, without discernible means of propulsion. In a small number of cases, military aircraft systems processed radio frequency (RF) energy associated with UAP sightings. [underline mine].The UAPTF holds a small amount of data that appear to show UAP demonstrating acceleration or a degree of signature management.”

From our viewpoint, the people at the UAPTF have a realistic approach, and that is essentially important.

Fortunately. they are not speculative, and there is not even a hint about aliens in the whole document.

The Report indicates that “In a limited number of incidents, UAP reportedly appeared to exhibit unusual flight characteristics. These observations could be the result of sensor errors, spoofing, or observer misperception and require additional rigorous analysis.”

About sensor errors, the same Report clarifies that: "The sensors mounted on U.S. military platforms are typically designed to fulfill specific missions. As a result, those sensors are not generally suited for identifying UAP.”

There is also a touch with reality concerning the environment that could surround the pilots when the Report mentions “spoofing” as the cause of some observations. It is known that this happened on board the "USS Nimitz" carrier.

The UAPTF recognizes that from 144 reports received they “were able to identify one reported UAP with high confidence. In that case, we identified the object as a large, deflating balloon. The others remain unexplained.”

The Report argues that a series of basic but very important activities “would require additional investment”.

The Report also points out that “Additional rigorous analysis are necessary by multiple teams or groups of technical experts to determine the nature and validity of these data”, and even more “we may require additional scientific knowledge to successfully collect on, analyze and characterize some of them.”

Finally: “The UAPTF has indicated that additional funding for research and development could further the future study of the topics laid out in this report. Such investments should be guided by a UAP Collection Strategy, UAP R&D Technical Roadmap, and a UAP Program Plan.”

And, last but not least, a great and clear definition of what is called a UAP. It says:

With this definition, the Report is indicating that a UAP will be finally identified, that it does not forever remain Unidentified and that the key factor in the work of the UAPTF is identification.

We agree totally with the work planned –provided it is funded— and more importantly, with the honest position of the UAPTF.

There is no place for fantasy or speculation. The matter is serious and could compromise national security.