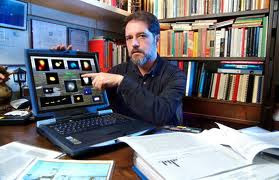 Dr. Massimo Teodorani is a northern Italian astrophysicist, and obtained his “Laurea” degree in Astronomy and his Ph.D. in Stellar Physics at the University of Bologna.

As a researcher at the Astronomical Observatories of Bologna and Naples, and later at the INAF Radiotelescope of Medicina he has been involved in research on many types of explosive stellar phenomena – such as supernovae, novae, eruptive protostars and high-mass close binary stars – and, more recently, in the search for extrasolar planets and extraterrestrial intelligence within the SETI Project.

Dr Teodorani subsequently taught physics as a lecturer at the Universities of Bologna, Rome and Torino.

Among his varied research interests there is an active involvement in the study of anomalous aerial phenomena.

He is also an expert in military aeronautics.

In addition to many technical papers in all of the above mentioned subjects, he is the author of 18 bestselling books , which have been translated into multiple languages.

Fully fluent in both Italian and English he has had many interviews in various media about his researches, and he is a highly acclaimed public speaker.

Dr Teodorani is a composer of electronic music under the pseudonym “Totemtag”. 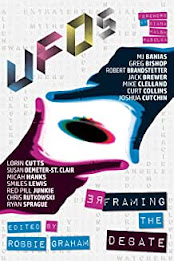 During the last 30 years I have been collecting many books dealing with the controversial issue of UFOs. Out of about a thousand of them only 19 (or so) remained memorable. All the others… well they conveyed information like music (and very often cacophony) that entered inside one ear and went out from the other. Apart from those 19 exceptions, I found all the other books boring, simply collections of stories (which doesn’t mean facts), unscientific or pseudoscientific, dogmatic, disinformative, hoaxed, confused and even cult-like or skeptical in a counter-dogmatic way. As a physical scientist I have tried to search for (in this kind of literature) some signs of scientific methodology and/or of deep reasoning, critical thinking or reflections. I found only very faint signals of that, so far. Much to my pleasure my very strict selection of UFO books rose from 19 to 20, after seeing a flat diagram during the last 15 years.

I must say that “UFOs: Reframing the Debate” was able to awaken my interest again in a phenomenology that deserves an in-depth interdisciplinary study. Due to my profession I am mostly interested in an approach to the phenomenon where it is possible to acquire true physical data coming from measurement instruments, which is partially achievable at geographic hotspots where the phenomenon is most recurrent.

In a parallel way I have also been reflecting a lot on the typical high strangeness that characterizes the UFO phenomenon and that lets some of us think that a probable “consciousness-driven factor” almost always comes out when true witness cases are professionally analyzed in detail, and far from any possible belief system. The book, written by 14 different authors, which shows very interesting heterogeneous alternative approaches (some of which are totally new to me) is able to focus much the attention on this. In particular it is able to examine in depth the complexity of the phenomenon, out of any classic ETH or nihilistic preconceived dogmatism, and, above all, it is able to stimulate the correct interrogatives in the intent and attempt to approach, at least asymptotically, a still totally enigmatic territory instead of a very comfortable and anthropomorphic map of the phenomenon.

Therefore to me this book shows to be a strong intellectual stimulation, which is useful to everyone who really wants to try to understand this subject beyond wishful thinking, ranging from the physical and biological scientist to the psychologist or sociologist, or even philosopher.

In fact this phenomenon deserves a scholarly and even academic approach. The door to new possible true discoveries can be opened only if the correct questions are asked (even with courage and disenchantment) and only if the problem is first understood in its complexity and completeness before trying to solve it. The book succeeds very well in this.

In the book, several interpretations of the UFO phenomenon are exposed and critically discussed and, although being often different from each other, they are tied by a common thread, which aims against the classic “nuts and bolt”-like ETH hypothesis, although not denying it a-priori, but rather denying it as a consolidated belief system and only too often as a cult too.

I must say that    has been very able to collect together excellent and thought provoking essays, which are also harmonized together even if in their diversity. Several essays, and the depth with which they are written, remind me a lot the famous Vallee’s “Magonia interpretation”.

Then I am particularly intrigued to see by very skilled scholars inside this anthology how the UFO phenomenon’s true behavior resembles more a “paranormal” and/or consciousness manifestation than a simple and plain aerial anomalous phenomenon or nonsensical abduction event.

I personally have studied witness cases only statistically in order to see if some pattern was coming out from them, but after reading this book in detail I realize that much, if not all of it, of the phenomenon is focused on the intrinsic nature of the witness itself, whose psychology manifests at times transient anomalies where it seems that the experiencer collaborates in the creation of a phenomenon that is only apparently all out of him. This makes me think of something very big that is related to human consciousness and (maybe) its possible interaction with an “external intelligence” or, like Jacques Vallee likes to call it, a “control system” that might like to stimulate human consciousness due to reasons that we don’t know yet.

It is just this phenomenology that shows maybe something of ourselves that we didn’t know we had. This is of great interest to neurosciences too, not only to psychology and sociology, but also to neurophisiology in cases in which some particular electromagnetic field is able to induce hallucinatory states in the human brain.

I really love the “skeptical” essays inside this book too: this, not being driven at all by an uncritical dogmatism, is extremely helpful as an irreplaceable guide for those who approach the UFO issue for the first time. In fact it is fundamental to know before all the characteristics of the “noise” (including many hoaxes and fakes that have been perpetrated during at least 70 years, and misinterpretations of IFOs) before expecting to concentrate the attention on the true “signal”. A fuzzy signal anyway, which reminds me a lot the probability function of a quantum event before the wave function collapses after the observation process occurs.

All 14 essays, although being different from each other, are gently aimed against, not just the ETH theory per se (which is not excluded at all), any belief system (or even religion or cult) that has been arbitrarily built around the UFO phenomenon in all of its aspects.

Such essays open new intellectual doors to an alternative methodology of studying the phenomenon’s complexity, which necessarily involves a true scientific investigation of all that which is measurable coupled with a more interdisciplinary approach where the witness seems to be the center of gravity of such high-strangeness events.

This – countered to any “spiritual” approach – is aimed at studying human consciousness, and maybe at verifying how and if human consciousness (maybe coupled with a superior one of which we are not normally aware) is able to interact with the material world. The book has raised very crucial questions, which if they will be answered in some not too far future, might really radically expand the knowledge of the world and of what we call “reality”, and most of all, of ourselves.

Every chapter is well written and harmonized with all the rest. The book is very well structured inside a coherent framework even within diversities. The provided documentation is rich, pertinent and well chosen.

I recommend this book to people of whatever competence and profession, but most of all to serious scholars and students who are sufficiently mature not to believe any more in the tales of an alien Santa Claus and at the same time are critical thinkers with healthy open minds.

Article reproduced with authorization of the author.