Publication of a new book: "THE MARFA LIGHTS"

A new book appears in the bibliographic constellation of the UAP and related topics. Here it is about what fits within the so-called Anomalous Light Phenomena.

Specifically, it is about the The Marfa Lights, a place in Texas close to the town of Presidio, which is crossed by a highway and in which - as a historical plaque establishes - "they have been denounced for more than a hundred years" and "the first recorded observation of the lights was made by landowner Robert Ellison in 1883, "when - obviously - the highway id not exist.


Now, our fellow researchers and scholars, the Engineer Manuel Borraz Aymerich and Vicente-Juan Ballester Olmos, have made a detailed study of these lights and their characteristics, and the fruit of it is in their book in English entitled The Marfa Lights.


Here we reproduce the announcement of the book, that V-J Ballester Olmos was very kind to send us.
===========

BOOK ANNOUNCEMENT
THE MARFA LIGHTS
Examining the Photographic Evidence (2003-2007)
By Manuel Borraz & V.J. Ballester Olmos
(July 2020)
We are pleased to announce the release of a book dedicated to the scientific analysis of photographs of the so-called “Marfa Lights,” an allegedly anomalous phenomenon recurrently observed in Marfa, Texas.
Between 2003 and 2007, seven series of high-quality photographs were taken in the area, claimed to be genuine examples of close-to-the-ground lights that defy conventional explanation. They were not a simple subset of examples of MLs, but the best and most significant photographs ever achieved of the phenomenon.
Over two years, taking an almost forensic approach, we have analyzed this evidence and come to firm conclusions that establish the true nature of the lights beyond any reasonable doubt. We are convinced that the corollary applied to the images and events discussed can be justifiably extended to the rest of the Marfa “mystery lights.”
Using advanced astronomical and geographic software, we have developed a specific methodology for analyzing this type of photographic evidence, which other researchers can apply to identify similar images of “mystery lights” from other parts of the world.
We are proud of the reaction that scientists from a wide range of disciplines have had to our work, as the quotations in the attachment show.
This work is FOTOCAT Report #8 in a series of monographs produced by the FOTOCAT project. It contains 174 pages, 102 illustrations and 70 references. This monograph is available free of charge through the following link:
https://www.academia.edu/43589341/THE_MARFA_LIGHTS._Examining_the_Photographic_Evidence_2003-2007_
Advanced praise received from early reviewers
This research is unique and a major contribution to identifying the causes of the Marfa lights using models of cars traveling on distant highways and roads from across the Marfa plateau. It is amazing just how well the models replicate the 'behavior' of nearly, and likely, all of the known observations of this phenomenon. In the end, car headlights combined with the mirage phenomenon are all that seem needed to once-and-for-all settle the many disputes about the origins of the Marfa Lights. Kudos to the investigators for offering this new and compelling evidence!
Dr. Sten Odenwald, Astronomer, NASA Space Science Education Consortium
An excellent scientific investigation. The depths of your analyses are remarkable.
Dr. Robert Wagers, co-author of Mysteries of the Marfa Lights Revealed, USA

The authors have carried out a very thorough and scrupulous analysis.  They managed to prove that Marfa Lights can be explained in the context of well-known ideas about the propagation of light emitted by car headlights. The techniques used by the authors of the book may also be useful for studying the phenomenon of ball lightning.
Dr. Anatoly I. Nikitin, Secretary of the International Committee of Ball Lightning, Member of the  Russian Academy of Natural Sciences, Russia

It is a fascinating project; you and your colleague have obviously put a lot of time and careful thought into it… your methodology seems sound and I find your report persuasive.
Dr. Peter A. Sturrock, emeritus Director of the Center for Space Science and Astrophysics, Stanford University, USA
Great work. Not a refutation but a full reanalysis. Overwhelming and solid conclusions.
Julio Plaza del Olmo, physicist and investigator, Spain

You have criticized the estimations of height using a reasonable qualitative guess (atmospheric refraction of the image), and for the velocity using a quantitatively better measure of time (from star image tracks in the observations).  I think that your analysis as far as it goes is good.
Dr. John Abrahamson, Department of Chemical and Process Engineering, University of Canterbury, New Zealand.

The report is perfectly argued and remarkably carried out. The visual appearance and behavior of the lights is incoherent with a possible luminous phenomenon of natural origin and related to electricity or natural magnetism.
Dr. Raymond Piccoli, Director of the Laboratoire de Recherche sur la Foudre, France

Having plowed the field of anomalous aerial phenomena for 45 years myself, I would rank this essay among the dozen or so best documented and most thoroughly researched studies on the subject ever published. The science is outstanding and the arguments solid.
Wim van Utrecht, Caelestia Project, Belgium

I fully agree with the methodology you explained. I consider that this work can be used as an example of scientific method. I have always considered Marfa lights with no strangeness and without any interest, and you have made a lot of good work in order to dismiss the way believers perceive facts.
Dr. Claude Poher, former Space Research Engineer in CNES, creator of GEPAN in 1977 (SEPRA/GEIPAN), Quantum Gravitation researcher, France
Your book is  a detailed and painstaking work that covers a comprehensive overview of existing Marfa Lights studies and a thorough research of their origins.
Dr. Artem S. Bilyk, Assistant Professor, Kiev Polytechnical Institute, Chairman of SRCAA “Zond”, Ukraine

Somebody could say “all this work to get there”. I would say YES. It is necessary, because to believe is easy, to understand is hard work.  So, congratulations to the authors for their hard work. Today, our society is strongly concerned with fake news and some aversion to science, and any contribution which tries to balance this attitude is welcome.
Marcel Delaval, Informatics engineer, Joint Research Center of the European Commission, Ispra, Italy

When trying to observe the Lights with the CBS crew for "Unsolved Mysteries", I did determine that the Lights were incandescent in nature. Which fits with the "car light" hypothesis, but I really had hoped to make additional measurements of the Lights spectral signature to match those of car head lights. I never had the opportunity to do so.
Dr. Edwin Barker, University of Texas, McDonald Observatory, NASA/JSC Orbital Debris Program (ret), USA

The authors have tested the simplest hypothesis, one already postulated by other investigators: the light track phenomena observed are produced by car lights. In every single event when geographical verification has been possible, the photographed luminous trails match with local roads. These findings strongly weaken the hypothesis of existence of anomalous phenomena close to Marfa, Texas. This book is a great example of what should be a modern analysis of data on natural phenomena.
Prof. Vladimir Bychkov, Academician of Russian Academy of Natural Science, Russia
In this overwhelming work, Borraz and Ballester Olmos have analyzed some of the strangest Marfa Lights photographs and concluded that their nature is perfectly compatible with motor vehicle lights, without the need to invoke any unknown geophysical phenomena. During their work they mainly used software like Google Earth’s Photo Overlay tool and the stellar program Stellarium. Multiple hours of analysis and insight have revealed key errors in photographer’s data. The few existing discrepancies can be perfectly explained by the usual light refractions at these latitudes, the study of temperature inversion during the days of the events would confirm their suspicions to 100 percent. Marfa Lights are not a mystery anymore.
Dr. Félix Ares de Blas, Professor of Technology and Architecture of Computers, Universidad del País Vasco, co-author of El fenómeno OVNI. Análisis de 30 años de observaciones en España, Spain

In this book, Manuel Borraz and V.J. Ballester Olmos present a quite convincing example of what can be a thorough scientific investigation. They tackle the issue of the famous “Marfa lights” photographs, and more precisely of the so-called “genuine Marfa lights”, which represent a selection of the best and most controversial particular pictures. They choose a quite original and efficient approach, taking advantage in a very clever way of powerful existing tools available through Internet:  Google Earth and Stellarium. The quality and the accuracy of their rigorous and neutral analysis of the set of photos deserve my best congratulations.
Dr François Louange, Manager of IPACO (www.ipaco.fr), GEIPAN expert, Member of 3AF Sigma 2, France

I have always had a great respect for works related to real explanations of strange phenomena observed in the atmosphere and near space. I believe that the work you have done is very useful and highly commendable.
Dr. Yulii V. Platov, Pushkov Institute of Terrestrial Magnetism, Ionosphere
and Radio Wave Propagation (IZMIRAN), Russian Academy of Sciences, Russia 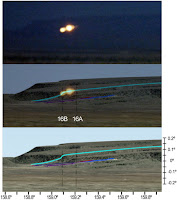 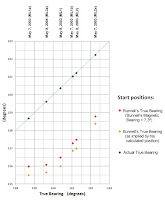