62 YEARS AGO C.I.O.V.I. STARTED THE UFO INVESTIGATION IN URUGUAY 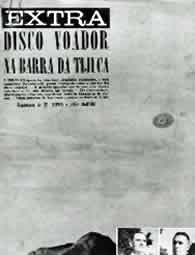 At the end of 1957, Brazilian magazine “O’Cruzeiro”, influenced by the perspective of Dr. Olavo T.Fontes (APRO representative in Rio de Janeiro) who had the belief that behind the “flying saucers” were aggressive entities, published a series of articles signed by Engineer Joao Martins.

Those articles mentioned individuals and institutions dedicated to the investigation and study of UFO reports. There were mentioned NICAP, Maj. Donald E. Keyhoe, APRO, Mr. Jim Lorenzen, and Ms.Lorenzen, in the United States; Dr. Olavo T. Fontes (in Rio de Janeiro), Prof. Flávio A. Pereira and Dr. José Escobar Faría (in Sao Paulo) and CBPCOANI, all of them in Brazil.

Argentina was represented by the organization CODOVNI, and two individuals, Ariel Ciro Rietti and Christian Vogt.

And the articles referred to American cases investigated by the USAF Project BlueBook.

With that in mind, I discovered that there was a whole world of individuals and organizations –included the official ones— dedicated to the subject. And then I asked myself: who deals with this issue in Uruguay? And I realized there was nobody. Then I wondered why not me?

But obviously, I wouldn’t be able to do it all alone, and therefore I talked with my friends. It was the end of 1957, and although the first reaction was of ridicule and laughs, some of them took it more seriously after I gave them certain information and decided to join me in my very patriotic engagement.

I do remember the names of Juan Carlos Zamudio, Adolfo Terzaghi, Jorge Denevi Griera, Walter A. Cifarelli Larragoitia, and Germán Sergio Vázquez Quartiani, as the first who were interested.

With Zamudio and Vazquez we went to a broadcasting station and made an invitation to the people that could be interested in “flying saucers” to meet with us.

On the night of April 29, 1958, at the headquarters of the YMCA, around 40 people were present. We had there a short talk, said we have to take some steps to organize ourselves, asked for those who could be interested to investigate to register, and finally, a group of seven of us met at a near restaurant and have a long talk about what to do and how.

There were Vázquez, Hermann, and his brother Erwin Jegerlehner, Vicente Curci, Walter Cifarelli, Jorge Denevi, and myself.

We agree that it wouldn’t be possible to work with 40 or more people, that we need to constitute a board of directors, with the traditional structure of a President, a Secretary, a Treasurer, and Vocals.

I was elected President, and in that way, we started working. One of the first things was to read a lot of the material coming from the United States, and other countries. The other thing was to create an Interrogation Form to be filled by the investigators but signed by the witnesses. That will be the base for the following study of each UFO report and later analysis and conclusion. 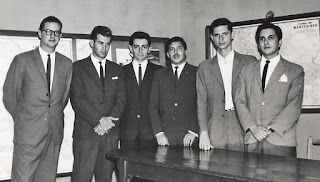 After less than a year from our beginning, although there were responsibilities distributed among us, we get rid of the old structure of a board of directors to become Directive Counselors, each one with the same rights and capacity to represent the Center in our relationship with the press, other institutions, and the eventual witnesses

CIOVI was first to get in contact with the Uruguayan Air Force and share the results of its investigation; the first developing a computerized analysis of UFO cases; the first to organize the only colloquium done in Uruguay between Argentinean and Uruguayan investigators, the first to create a National Correspondents Network, the first to analyze and discard systematically that the reported “tracks” in different fields were related to supposedly landing of UFOs, the first to present in Uruguay the documentary film “UFO” and the French film “Le Ciel sur la Téte” (They watch over us from the Cosmos”); the one that organized the visit to Uruguay of Dr. J. Allen Hynek and his Secretary for Latin America, Dr. Willy Smith. The first to identify the photography of an apparent strange object near the Centenario Stadium in 1930 as a captive balloon, publicity of Michelin tires. The first to investigate and determine with a precision that former Astronaut Neil Armstrong never visited "La Aurora" farm. The first to organize a theoretical and practical course for the preparation of future investigators.

During the years of CIOVI, some of its members traveled to Argentina, Brazil, and France to get in contact with investigators in those countries.

On the other hand, the relationship with the press, newspapers, radio stations, and TV stations was very good and fluid, dealing with outstanding journalists in all that media.

And periodically, members of CIOVI gave public lectures in different institutions, most relevant among them the YMCA and the Planetarium.

C.I.O.V.I. put an end to his work after 50 years, in 2008, when it was clear that the UFO subject was no longer relevant to the public, and there was a notorious reduction in the number of reports.

If there is currently to be an official investigation, it must be based on the rigorous application of the scientific method and define its task as that of Aero-Space Identification.