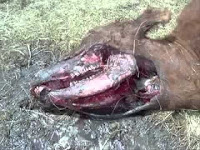 I admit, it is not an Unusual Aerial Phenomenon, therefore it shouldn’t be dealt here.

Personally, I do not subscribe the tales, ideas, and suppositions of many people who believe in extraterrestrials and attribute to them the cattle mutilations. For me, that sounds absurd and ridiculous.

No one with a rational way of thinking, or just with common sense, could even imagine that nonsense.

But the mutilations are real. And it is a phenomenon that continues happening in the United States and abroad.

I am particularly concerned about what happens in Argentina.

There are no cases of cattle mutilations in the neighboring Chile.

And one of the things that surprise me is that Uruguay, neighboring Argentina and with a lot of cattle, apparently do not have reports of cattle mutilations.

There have been some reports of cattle rustling, which is a crime and is something totally different.

The difference between Uruguay and Argentina is that in the latter, there are people dedicated to requesting reports of cattle mutilations and publish photographs of animals that apparently went through that situation.

The opinion of veterinary surgeons and experts has been in many cases that the mutilation has been caused by predators. And highly possible that could have happened in some cases.

But there are other cases where it is impossible to attribute to predators what is found in the fields.

Thinking in the whole subject of mutilations but mainly in what is going on in Argentina, I want to specifically refer to the particular characteristics that authenticate a real case of cattle mutilations and the steps that the investigators should take on a given case.

1)   The cattle subject to mutilations are between one and three years old, preferably.

2)   Check for any marks in the soil around the animal. If there are, take pictures, measure and take samples of them for farther analysis. Most probably there wouldn’t be any mark of steps or vehicle tracks.

3)   Check for radioactivity in the area where the animal is found, and in the animal itself.

4)   With the use of ultra-violet light, verify if it is possible to see a  glittering substance on the right side of the neck, the right ear, and the right foreleg. This is the way the cattle are marked for future mutilations.

5)   Take samples of the parts of the animal with that substance and those which has not, and send them to a laboratory for analysis.

6)   It is known that the substance is due to significant deposits of potassium and magnesium. The potassium content could be 70 times above normal.

7)   Ear, eyeball, jaw flesh, tongue, lymph nodes, genitals, and rectum are removed, and blood has been totally drained and there is no sign of blood in the immediate area or around their wounds.

9)   Other animals in the area avoid approaching the dead one, even scavengers.

10)         Verify if relatively near to the place of the cattle mutilation there is a nuclear facility, laboratory or company that works with radioactive material.

11)         Verify if the owner of the field or his workers has seen some lights in the sky or some sounds, immediately previous to the discovery of a mutilated animal. Get the most precise description of the lights and the sounds.

These are basic guidelines trying to contribute to the investigation of these bizarre cases.

Finally, I want to emphasize that if the typical characteristics of a cattle mutilation described on numeral 7 are not present, therefore the reasons for an animal to be found dead could be totally others.

Although it is a fiction, there is a movie (“Endangered Species”) that deals with this issue. The main idea is there reflected. Pay attention to the texts at the beginning and the end of the film. I recommend to see it. It is on YouTube.