NAMED AS “NASA UFO” IT TURNED OUT TO BE SOMETHING ELSE

Recently, there is a surge of web pages –everyday appears a new one—repeating the same story as if it were a real discovery.

This is as old as Ufology. It is like when some writers copied and repeated without a minimum of research or intellectual honesty, that Capt. Thomas Mantell persecuted a UFO with his F-51 jet.

The fighter airplane Mustang P-51 (the P was for Pursuit)  or F-51 (the F is for Fighter) as it was designated in 1948, was a single internal combustion engine craft. Not a jet.

NASA published long time ago a picture of the Earth taken by the crew of the Space Shuttle Columbia during their Mission STS61-C.  In two of the photographs appears a black triangular object.

The fantasy prone mentality of many of those who call themselves “ufologists” had made them to publish and republish any of those two pictures under the title “NASA UFO photograph”.

Well, we go to the credible sources (1) and to what NASA has already said about the object that appears there.

Here is the photo and the explanation. 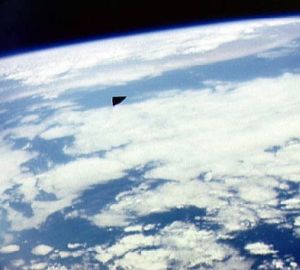