Argentina: A false UFO and the lack of responsibility of the media 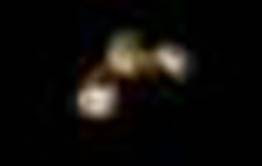 Once again, we regret that it happened in Argentina. But it is almost folkloric, endemic.

This kind of things do not happen in other countries with the frequency and the noise they produce in the South American country.

There is more responsibility by the media, and there is less speculation, enthusiasm or search for notoriety by certain individuals.

This started happening on December 10, 2010, when Gaston Garnier –a 26 years old photojournalist- took a picture in Venado Tuerto, Province of Santa Fé, of what he (and anyone else) thought it was a “UFO”.

He did not get in contact with any serious Argentinean investigator. But he found in the Internet an e-mail address that he supposed belonged to NASA, and he sent the picture requesting an analysis. Apparently he did not realize that the address was ending using the domain “com” and not “gov” as it should be.

To his surprise, time later, he received a letter written in Spanish validating his picture as authentic.

Then, he went public and the Argentinean press published the picture and the letter that supposedly was from NASA. The news appeared almost in all the newspapers on April 16, 2011.

The information was taken by EFE, other agencies and news outlets including the BBC!

Fortunately, some media, but not all, and particularly not many of those that published the sensational news of a confirmation by NASA, brought the news that the letter from NASA was false, that the whole case was a fraud.

It is also to regret that some self proclaimed “UFO investigators” reported the case as authentic, without taking into account that: 1) NASA do not deal with the UFO subject; 2) NASA documents like a letter always will be written in English; and 3) As a government agency, the NASA domain is “gov” and never “com”.