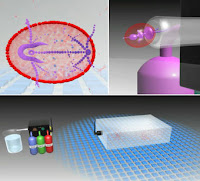 Wanted: Home Computers to Join in Research on Artificial Life
(an article published by The New York Times)
By JOHN MARKOFF
Published: September 28, 2009

Having trouble discovering extraterrestrial life? Then you might consider evolving your own.

In October, a small team of Silicon Valley researchers plans to turn software originally designed to search for evidence of extraterrestrial life to the task of looking for evidence of artificial life generated on a cluster of high-performance computers.

The effort, dubbed the EvoGrid, is the brainchild and doctoral dissertation topic of Bruce Damer, a Silicon Valley computer scientist who develops simulation software for NASA at a company, Digital Space, based in Santa Cruz, Calif.

Mr. Damer and his chief engineer, Peter Newman, are modeling their effort after the SETI@Home project, which was started by the Search for Extraterrestrial Intelligence, or SETI, program to make use of hundreds of thousands of Internet-connected computers in homes and offices. The project turned these small computers into a vast supercomputer by using pattern recognition software on individual computers to sift through a vast amount of data to look for evidence of faint signals from civilizations elsewhere in the cosmos.

The EvoGrid goal is to detect evidence of self-organizing behavior in computerized simulations that have been constructed to model the first emergence of life in the physical world. Pattern recognition software on home computers would seem a perfect tool.


The project is a new effort in the field of computer-based artificial life research, which generated great interest among computer scientists and biologists in the 1980s and ’90s but waned as rapid progress was made in synthetic biology. In the past decade researchers have begun modifying genetic material for applications like drugs and the growth of fuels. Many scientists believe the field stands close to synthesizing biological life from basic materials.

Digital artificial life research is based on the original work of Stanislaw Ulam and John von Neumann at Los Alamos Laboratory during the 1940s. Von Neumann posed the idea of a cellular automaton, essentially an array of cells, like the squares of a checkerboard. Each cell could represent simple states like on and off, creating an ever-changing lattice that could be programmed with simple rules in a computer.

Later artificial life researchers created programs to take advantage of the growing power of computers to model evolution in simple, abstract universes. Tierra, in particular, first developed by the ecologist Thomas Ray in the early 1990s, drew a great deal of attention. The program, which ran on more than 100 workstations, demonstrated the mutation of digital forms and elementary aspects of evolution. More recently, Spore, from Will Wright, popularized many of the aspects of artificial life in a game that is now widely available on desktop computers, videogame consoles and even iPhones.

Yet despite widespread interest, the field has had difficulty escaping the critique that modeling such “toy universes” may be intellectually interesting but is unlikely to create digital forms with the incredibly complex properties of biological life.

“Every 10 years somebody revives these systems,” said George Dyson, a science historian, who worries the EvoGrid may be reinventing the wheel.

The project also has its defenders.

“My attitude is, let’s give the strong artificial life hypothesis a chance,” said Richard Gordon, a radiologist at the University of Manitoba, who has written widely on the subject and is an adviser to the project.

Answering skeptics, Mr. Damer said that by coupling far more powerful computing systems than previously available, with potentially tens or even hundreds of thousands of PC-based observers, the EvoGrid could make it possible to detect emergent behavior. “The main challenge,” he said, “is not the generation of some kind of novel molecular interaction. Rather, it’s the analysis and trying to see what’s going on.”

To quickly build the EvoGrid, the researchers are relying on two open-source software projects.

Boinc is a system financed by the National Science Foundation that uses the Internet to permit scientists to take advantage of free computing cycles available on network-connected computers. Last week, for example the system was composed of more than 500,000 computers that generated an average of almost 2.45 petaflops of computing power. By contrast, in June of this year, the world’s most powerful supercomputer, built by I.B.M. at Los Alamos National Laboratories, produced 1.1 petaflops.

To simulate digital evolution, the EvoGrid will use a second program, Gromacs, developed at the University of Groningen in the Netherlands, to model molecular interactions. EvoGrid researchers hope to create a computer model that replicates the early ocean and then use it as a virtual “primordial soup” to quickly evolve digital forms.

Software simulations that can model evolution could be used by human designers, Mr. Damer argued. “We can’t build cars and airplanes or even toys these days without computer modeling and simulation,” he said. “So why not biochemistry?”

A version of this article appeared in print on September 29, 2009, on page D3 of the New York edition.