THE PILOT WHO HELPED SENATOR REID 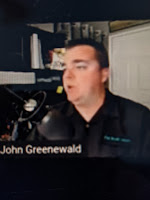 Our colleague investigator John Greenewald Jr. in his very important web page The Black Vault just came from publish an official document, with a lot of redacted pieces, where essentially a Committee of the U.S.Senate, probably presided by Sen. Harry Reid –whom specifically is mentioned in the document— received a Navy Pilot who pursued, locked-on and possibly shoot against a non identified target.

The pilot confess that he went and called the attention of the Senators, hoping that other pilots would follow him, helping to promote the UAP subject at a national level. 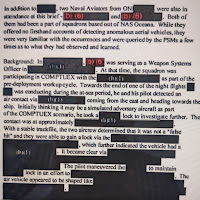 After reading the document, we don’t know who were all the Senators that met with the pilot, neither who was the pilot.

But we come to know something very interesting: 1) when the pilot returned to the carrier he was immediately tested for possible use of drugs; 2) he didn’t know what happened with the video of the UAP he took; and 3) he was surprised for the total lack of interest by the authorities on the carrier and later by the authorities of the Navy.

What happened before his appearance at the Senate committee is not difficult to imagine. Either the pilot got in contact with Senator Reed knowing his personal interest in the UAP subject, or Senator Reid tried to reach the pilot to have a special meeting with him, because later the Senator will persuade a couple of his colleagues to allocate 22 million dollars to a project that supposedly would study the UAP at the Pentagon.

Our readers already know the story of those 22 million dollars that went mostly to the entrepreneur Robert Bigelow, a political supporter of Senator Reed.

And this is the end of the story.

The official document has the virtue to reveal some actions taken before Senator Reid proposed to assign money for an official UAP investigation by the Pentagon.

The other thing that we consider more relevant is the total lack of interest by the Navy to know what happened to one of its pilots.

According with Mr. Greenewald, this F-18 pilot could have been the one who took the video of the so-called “Gimbal” UAP, but nothing is for sure.

Anyway, we consider quite relevant the hard work of The Black Vault to put light in many nearly unknown official documents and activities that only the perseverance of Mr. Greenewald makes him capable to obtain.