HOLOGRAPHIC PHENOMENA IN THE SKY


Disclaimer: Just in order to provide possible clues about some things that could be seen in the sky over some countries, I present the following material.
The best material belongs to  Kathy J. Forti, Ph.D., a clinical psychologist, David Arkyn who wrote in “The Conscious Reporter. Sci-Tech” and from military sources.

Abstract: Essentially, the projection of big holograms in the sky is considered within what are called non-lethal weapons, and is used as part of psychological operations (psy-ops).

I’ve found the first reference in an article written by David Hambling, who is a freelance writer and author living in South London. He writes for New Scientist magazine and the science section of the Guardian newspaper among others, specializing in topics relating to military technology. He also explores the wilder side of science in a monthly column in Fortean Times magazine.

The article is of November 24, 2006, published under the title: “Fighting Shadows: Military Holograms” in the web page Military.com
Following this article, I was able to reach a very important material whose Editor is Dr. Robert J. Bunker.

He is an Epochal Warfare Studies Scholar and security consultant focusing on non-state opposing force research, analysis, and defeat strategies. He holds a Ph.D. in political science from the Claremont Graduate University; and five other university degrees, in political science, government, behavioral science, social science, anthropology-geography, and history.


Bunker has over 200 publications including numerous edited works, booklets, chapters, and articles in policy, law enforcement, and military venues.
The presentation of Dr.Bunker dates from December 1996 and was done to the USAF Institute for National Security Studies USAF Academy, Colorado, under the title: “NONLETHAL WEAPONS: TERMS AND REFERENCES”

The Department of Defense defines these weapons as follows:

Weapons that are explicitly designed and primarily employed
so as to incapacitate personnel or materiel, while minimizing
fatalities, permanent injury to personnel, and undesired
damage to property and the environment. Unlike
conventional lethal weapons that destroy their targets
principally through blast, penetration, and fragmentation, nonlethal
weapons employ means other than gross physical
destruction to prevent the target from functioning. Non-lethal
weapons are intended to have one, or both, of the following
characteristics: a. they have relatively reversible effects on
personnel or materiel, b. they affect objects differently
within their area of influence [229:1-2].
The paper contains a list of 23 non-lethal weapons, and on the specific subject of holograms it details the following:

Hologram, Death. Hologram used to scare a target individual to death.
Example, a drug lord with a weak heart sees the ghost of his dead rival
appearing at his bedside and dies of fright [149:4].

Hologram, Prophet. The projection of the image of an ancient god over an
enemy capital whose public communications have been seized and used
against it in a massive psychological operation [609].

Hologram, Soldiers-Forces. The projection of soldier-force images which
make an opponent think more allied forces exist than actually do, make an
opponent believe that allied forces are located in a region where none actually
exist, and/or provide false targets for his weapons to fire upon. New concept
developed in this document.

The second reference that I was able to find, was an article in the webpage “Disclose TV” of May 1st. 2008, under the attractive title: “PROJECT BLUE BEAM - PROJECTING UFOS IN THE SKY”

It starts by saying that: “Chris Morris and Janet Morris are non-lethal weapon technology experts that are consultants to CIA. They mention a technology that they are confidential. But generally, Morris's talked about a secret military experiment with life-like three-dimensional projection in the sky called holograms.”

Later the article indicates that: “As far as projection is concerned, it is a highly developed satellite-based projection technology that is capable of projecting holograms of immense size into the atmosphere. This involves the use of a special layer containing sodium at an altitude of about 100 km (thermosphere), which is used as a kind of cosmic projection surface.”

The author (unknown) comments that: “It could be used to show the enemy what they believe or might be frightening for them, like an angel, devil, or even a UFO..... So once the UFO news hit all TV devices worldwide, don't fall for it!”.
----------
The third reference is the article written by Kathy J. Forti on May 6, 2015.

Among many other things the paper of Forti says:

“Holographic projection, also known as “strategic perception management,” can turn the whole sky into a one big LCD screen to beam holograms from multiple space-satellites and aerial drones. Ever wonder why the U.S. has over 1,000 active satellites in space? They’re not just for weather and spying. These satellites have the capability of beaming images off each other to create a 360 degree Disneyland movie theater.  Outmoded transparent hologram images have been replaced with holograms that can project full sound, light, heat, and everything needed to make it Hollywood believable.”

According to a 1999 Air Force Manual on enemy perception management (whose links I found are now disabled), this technology is very real:

“The holograph projector plays a three-dimensional visual image in a desired location, removed from a display generator. The projector can be used for psychological operations and strategic perception management. It is also useful for optical deception, and cloaking, providing a momentary distraction when engaging an unsophisticated adversary. And it has capabilities for precision projection of three-dimensional visual images into a selected area. Supports [Psy-Op and strategic deception management and provides deception and cloaking against optical centers.”]

“Many of the futuristic vehicles of terrestrial origin carry advanced directed energy weapon technologies using broad-band holographic technology to easily ‘cloak’ or conceal and/or present false targets.
Beware of false flag events from those in authority that tells you what is best for you. Stay conscious, cautious, and be aware. These are challenging times as we all search for answers and Truth.” 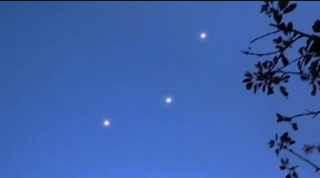 ----------
The fourth and final source of information is an article by David Arkyn, a man who deals with spiritual issues but that in this case is worried about the effects of using certain technologies like holograms in the sky.

Under the category of Sci-Tech in “The Conscious Reporter” Arkyn writes:
“Strange sights like giant floating cities have been reported, seen and even filmed by multiple witnesses in different continents. As recently as October 2015, the UK Express reported that floating cities had been seen in China, first over Foshan in the Guangdong province, and a few days later in the province of Jiangxi. A similar "phantom city" was seen over China in 2011. In May 2015 villagers in Dulali, in Lanzai South Ward, Darazo, Africa Local Government of Bauchi State, Nigeria also witnessed a city floating over their village on multiple occasions, replete with cars and emanating mechanical noises – a sight they attributed to Allah.” 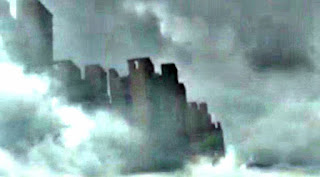 “According to Truthstream Media, there is compelling evidence that since at least the early 1990s, the US military has been exploring the possibility of creating gigantic holograms that could be used for large-scale deception missions by special operations forces.”

“The fact that this type of technology exists highlights the importance of becoming informed about how easily people’s psychological responses can be manipulated and conditioned by those in positions of power. As the old saying goes, to be forewarned is to be forearmed.”
-----------------
Each one of us could come to a conclusion about this subject, but I think we are obliged to know about it and to have it in mind under certain particular situations referred presumably to what people call “UFOs”.