This military UFO made a Midwest appearance 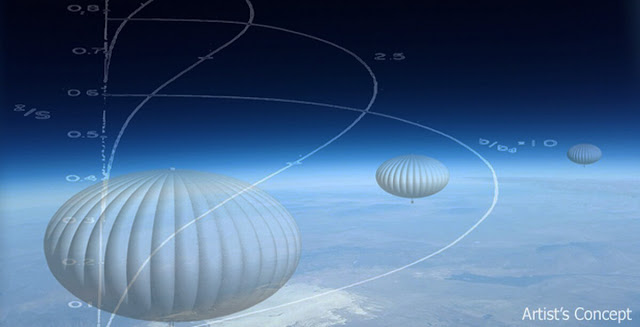 The Adaptable Lighter Than Air (ALTA) balloons are designed to navigate through winds by changing altitude. (DARPA)

In the sky above Kansas City drifted unknown floating objects peculiar enough that the National Weather Service felt compelled to tweet, “We honestly have no explanation for the floating objects over Kansas City,” along with a blurry picture of two orbs set above the clouds. As much as the internet delighted in projecting extraterrestrial mischief onto the sight, the truth was out there, and both more and less than it seemed: The objects above Kansas City were a DARPA project.


The “Adaptable Lighter Than Air” program, or ALTA, seeks to develop and demonstrate high-altitude lighter-than-air vehicles that can navigate by the wind over extended ranges. “High-altitude” here is defined as above 75,000 feet. The balloons will rely entirely on the varied winds above, and while they do not have propulsion of their own, they can adjust altitude to catch winds in different directions.


DARPA launched three ALTA balloons from Cumberland, Maryland, on June 18, 2019, and confirmed that it was, in fact, their balloons spotted above Kansas City June 20. Asked if DARPA was tracking the balloons, the agency said that the ALTA balloon flights are coordinated with the FAA starting weeks before launch and the ALTA team is in regular communication with the FAA.

“The balloons are controlled from fixed and mobile ground stations, with consistent point-to-point links and satellite relays,” said Dr. Alexander M.G. Walan, ALTA program manager, noting that the craft have sensors on board used to assess flight performance. In addition, the vehicles are distinct from weather balloons because they are larger and capable of navigation.

As part of ALTA, the agency is also developing a sensor to provide real-time stratospheric wind measurements. Outside scientific curiosity, the real test of an entirely wind-borne vessel will be what kinds of payloads can fit on it, and what information they can meaningfully transmit back.


Fitting cheap and useful sensors to expendable vehicles is something the military is already working on, though it’s easy to imagine that the weight constraints on a buoyant balloon will be greater than on a descending glider or a powered drone.


The utility of such a platform hinges greatly on cost and payload. Sensors that could be launched into the wind and reach across the globe could prove useful for providing information of places too dangerous for crewed or unmanned aircraft, and also in areas where satellite coverage is for some reason unavailable.


Wind and balloons are also responsible for one of the strangest intercontinental attacks in history. During World War II, Japan built balloons that carried firebombs and lofted them into the jet stream, where they traveled across the Pacific ocean, sparking the occasional forest fire and in at least one instance reportedly killed a family of civilians.

Nothing about DARPA’s program suggests it will borrow from this history of aggressive ballooning. Instead, the ALTA platform looks like a new way to explore what, exactly, the wind can deliver.