The following material was sent by our friend, investigator Thomas Tulien.
He graciously participated in the survey among investigators and scholars that allowed me to create the book "Aliens, Ships and Hoaxes" published by Amazon.

Now, as a consequence of the extense article of Joel Campbell who refers to the difficulties the U.S. Air Force faced at the beginning of the Cold War to monitor the sky to detect and prevent an aerial attack by the USSR, Tulien sent to this web page this article that we are pleased to reproduce here.

It is an important testimony of those difficulties of the USAF but also how it intelligently managed to overcome them and its particular interest to identify any aerial craft supposedly coming from the Soviet Union, and how to compare them with the known American aerial objects. These were considered as identified, the others couldn't be identified as known American objects, therefore were unidentified.

Shortly after sundown, four radar controllers including station commander 1st Lieutenant Francis E. Parker were monitoring the night flying exercises of the 56th Fighter-Interceptor Group at Selfridge AFB. As the events unfolded, they were able to speak to the Lockheed F-80 fighter pilots over the VHF radio and ascertain their exact altitude, bearing, and speed. This provided a way to calibrate the accuracy of the radar systems and effectively eliminate the possibility of any internal malfunctions. Furthermore, the operators were monitoring two distinct radar systems—an AN/CPS-5 radar operating in the L-band (“long” wave) frequency designed to provide a search effective up to 210 miles at 40,000 feet; in conjunction with a separate height-finding radar set with a vertical antenna designated AN/CPS-4 with a range of 90 miles operating in the S-band (“short” wave) frequency.[i]Because of the significant differences in frequencies of the two radar systems any temperature inversion or atmospheric anomalies, which are extremely sensitive to frequency, would not display correlating and consistent returns on both radarscopes as was observed. According to Lt. Parker’s report, the target “indication was definitely not that of a cloud or atmospheric phenomenon. The clarity, narrowness, and definition of the presentation was definitely that of an aircraft.”[ii]

Lt. Parker, who arrived for duty in the radar station shortly after 6:30 P.M., relieved 1st Lt. Frank Mattson on the CPS-5 radarscope and established contact with the F-80 pilots who were already airborne. Crewmembers Sgt. McCarthy and Cpl. Melton remarked that they had been observing an intermittent target on the Height Range Indicator (HRI) scope of the CPS-4 radar at 45,000 feet altitude and over. At this time, the target was not visible on either radarscope, and since the highest assigned altitude of the F-80s was limited to 24,000 feet, Parker attributed the reports to radio-frequency interference or crew inexperience. But over the next fifteen minutes the crew repeatedly observed a target as it rapidly changed altitudes on the HRI scope. Eventually, Parker was able to break from monitoring the F-80s long enough to observe the target, which presented “a very narrow and clear-cut presentation on the HRI scope” at 47,000 feet with a range of 70 miles.[iii]


Further indications of what Parker described as an aircraft were picked up with increasing regularity over the next 45 minutes to an hour. Curiously, during this time the target seemed to stay in the area where the fighter pilots were flying, at times appearing to approximate their courses—though at 20,000 feet above them. Furthermore, from indications on both radarscopes the crew reported the target hovering in one position, and during a 4-5 minute period traversing from due east at 78 miles, to north at 53 miles, at an altitude of 45,000 feet—resulting in a speed approaching 1500 mph for this run. (The standard cruise speed of a F-80 was 410 mph.)[iv]Though unable to substantiate the speed himself, Parker conceded, “I knew only that the target was very fast.” This heightened his interest, and by momentarily turning around and watching the HRI scope he observed several extreme instances of altitude loss and gain, at times up to 20,000 feet very rapidly.


Finally, he was able to identify the aircraft on his radarscope, and simultaneously on the HRI scope as the target began to move away from the area to the southeast. With clear indications on both scopes, he recorded the range and azimuth on the minute, while Sgt. McCarthy recorded the altitudes on the HRI over the next six minutes. The results are indicated in the following graph.[v] 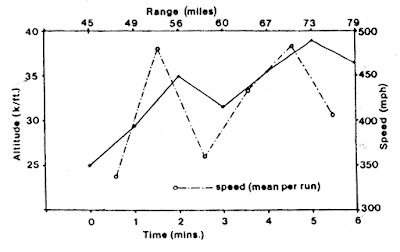 Selfridge graph. [Caption] Time, speed, range, and altitude plotted over a six-minute period at Selfridge Air Force Base in Michigan on March 9, 1950 (Shough, 1987).

Following this, the unidentified target faded from the radarscope, although for short periods they could observe it for durations of one and two minutes. Once more, at a distance of 110 miles it appeared to hover for two minutes, before fading from the scope at 120 miles for the last time.[vi]

In reference to the recorded data, Parker noted, “These figures, although not as spectacular as some of the climbs and speeds I observed, show definitely the erratic speed and altitude changes,” indicating that flight characteristics were not consistent with aircraft typically observed on his radarscopes. In fact, no aircraft known to be flying in 1950 could approach the performance envelope of the target, or remain stationary at high altitudes for up to two minutes. For example, the one-minute plots logged by the controllers indicate a climb rate of up to 7,000 feet per minute (fpm), at speeds over 450 mph and altitudes above 30,000 feet. For comparison, the maximum rate of climb of a clean F-80 was 4,950 fpm with a calibrated airspeed of 310 mph at sea level. These specifications decrease proportionally with increase in altitude (and the consequent decrease in air density). According to the F-80C flight manual, at 25,000 feet the standard rate of climb decreases by more than half to 2250 fpm at a calibrated airspeed of 260 mph, and more so as the aircraft approaches the service ceiling above 40,000 feet. As an experienced pilot Parker would have been cognizant of these standards.

His report of the incident reached Headquarters, Continental Air Command, Mitchell AFB, New York, where technical experts reviewed it, resulting in a classified letter of recommendation forwarded to the Director of Intelligence, Headquarters, USAF, in Washington, D.C. The letter, which corroborated Lt. Parker’s reporting, acknowledges that the great differences in frequencies of the two radar sets “almost rule out the possibility of anomalous propagation effects.” Furthermore, “The magnitude of the velocity and accelerations of the three dimensional movements of the ‘object’ reported are beyond the capability of known heavier or lighter than air vehicles in controlled flight.”

The experts also noted that field experience with the CPS-5 radar system at the ranges and altitudes reported indicate the aspect ratio of the object as comparable to a B-29 Superfortress or greater. The letter concluded with this acknowledgement:

“The frequency of reports of this nature has recently increased; instructions have therefore been directed to all radar installations within this command to report scope sightings of unusual objects. It is recommended that reports of unidentified flying objects be reconsidered for submission from all Zone of Interior Air Force agencies.”[vii]

Given the historical context in early 1950, at the advent of the Cold War—while lacking any early warning system to effectively guard against a Soviet invasion—Air Force officials had just cause to be concerned about unidentifiable aircraft operating in the vicinity of military facilities, particularly when they exhibited performance characteristics that could overwhelm existing technologies.

While most UFO reports lack reliable data, either because the observer had no means of acquiring data, or was unprepared to make use of the means at his or her disposal; the Selfridge observations demonstrate radar’s capacity to produce quantitative data, which can confirm in unambiguous fashion a range of performance characteristics of UFO reports. On two occasions the target appeared to hover at high altitudes, an attribute of many UFO reports beyond any aerodynamic capability to this day. In addition, radar provides a means to track UFOs over distances of hundreds of miles, and often in relation to known aircraft. Parker noted that during a 45-minute period of time “this target seemed to stay in the area in which our fighters were flying, sometimes approximating their courses, but 20,000 feet above them.” This implies rational behavior, or an inquisitive nature directed by intelligence. The ability to interpret intelligent behavior is a consistent and compelling feature of radar UFO reports.

[i]The MIT AN/CPS-4 system was recently installed as part of an initial phase in establishing an early-warning radar network to guard against Soviet invasion. This temporary system was given the name LASHUP to distinguish it from the Permanent System for which the Air Force was seeking appropriations (the result being the DEW Line in 1957). Forty-four radar stations across the U.S. began operation on June 1, 1950

[iv]Martin Shough has noted that the plotted speed of 1,500 mph over a 93-mile track may be inaccurate, however, even a factor-2 error in the calculation results in a speed well in excess of the maximum for the fastest operational jets in 1950. (RADCAT, 2002.)