On the afternoon of this Friday, July 27, Germán S. Vázquez passed away. He was a great friend, companion of the C.I.O.V.I. which he helped to found, and in which he developed an intense activity as a Board Member, researcher and scholar of the topic of Unusual Aerial Phenomena, by then called "UFOs".

On December 17, 2013, I wrote an article honoring him.
Today I find that article acquires a greater dimension.
Here it is: 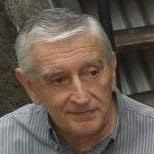 I am one of those who think that tributes have to be done when somebody is living and not in a posthumous way.

That is why I think this is the right moment to honor my dear friend and UAP expert, Germán S. Vázquez.
Vázquez was one of the co-founders of the Center for the Investigation of Unidentified Flying Objects (C.I.O.V.I.) in Uruguay.
On April 29, 1958, a historical meeting gave the kick off to the institution, the first in Uruguay exclusively dedicated to the investigation and study of UFO reports, and also to correctly inform the public.

Throughout the years, Vázquez performed different tasks. His natural talent to draw allowed the institution to have good reproductions of the witnesses’ descriptions, as well as to count on good images to be used in audio-visual conferences.

His expertise and training in dealing with people, represented the most secure resource of CIOVI every time a person came wanting to join the Center. He dealt with the people, informed them about our tasks and if the candidate could be a promising one, he/she were invited to join the Center as a team member.

Vazquez was also very helpful in putting recording devices at the service of C.I.O.V.I. to prepare a weekly radio program that was broadcasted by CX-14 “El Espectador”, one of the most prestigious broadcasting stations in Uruguay.

Vazquez sacrificed holydays and week-ends to travel long trips to reach the places where some people said they have seen something strange. He has a wonderful capacity to interrogate people and later to evaluate the answers.

Vazquez has to be recognized for his analytical mind and his correct way of thinking. Never fantasizing, never putting aside a reasonable doubt, but also being open to consider many possibilities.

Currently, Vazquez continues interrogating people, dealing with witnesses, exploring all the venues to explain a case, asking relevant questions to other colleagues, etc.

As he put it recently in an article he wrote:

“Personally...... I will continue to do as much as I can on this that, more than 50 years ago, I decided to study. Even as a tribute to those who gave a lot to unravel the mystery without asking anything in return.

It is the least I can do.

Fortunately there are other people who think like I do.

And, yes! It is worthwhile to continue.”

Yes, he continues, and is a real example of perseverance, staying firmly in the scientific principles that had guided the work done in C.I.O.V.I., a work that is now internationally in the hands of the UAPSG-GEFAI.

You are a living example of what an authentic, responsible and seasoned UAP investigator and scholar should be.