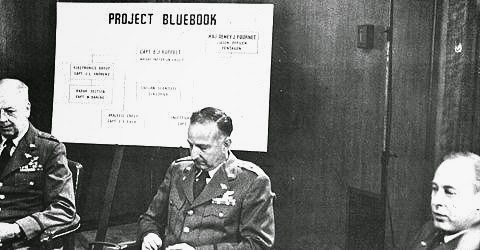 WHAT IS BEHIND THE DISCLOSURE OF OFFICIAL U.S. UFO FILES?


The first thing that surprise is the fact that contrary to what could be expected, the UFO files are not disclosed by the US Air Force, but by an individual who has never been considered or recognized or known to be a UFO investigator.

Apparently since he was 15 years old, he has been a collector of official files. And suddenly this individual, Mr. John Greenewald, Jr., creator of a web page named the Black Vault is the privileged depositary of all the UFO cases dealt by the US Air Force through the different Projects, starting with Sign, following by Grudge, and ending in the famous BlueBook.

The procedure is –to say the least— unusual.

When the Intelligence of the Royal Air Force of the United Kingdom decided to publish its files, it did it as an official procedure.  It was the RAF itself that make known their UFO files to the public.

When GEIPAN decided to open his files to the public, it adopted the same policy.

Of course, Mr. Greenewald as any American citizen is vested with the right to request and have official documents after the Freedom Of Information Act (FOIA).

Nevertheless, it draws attention the procedure used this time to let the public know the UFO files belonging to the USAF.

The Black Vault on the other hand, is a publication dealing with conspiracy theories, aliens, etc. not with a scientific approach of the UFO subject or any other subject.

To complete this panorama, Mr. Greenewald appears advertising a series of DVDs under the general name of “Fastwalkers” (www.fastwalkers.com).

If you want to buy the complete series of 16 DVDs you have to spend a total of US dollars 560.30, and I am sure they are not worthwhile of such an expense.
The participants on those DVDs expand hearsay, stories, speculation, and all the kinds of things that could be imagined around the basic idea that we are visited by aliens.

The list of the people that appear in those DVDs exempt me of further commentaries. Just take by yourselves a look to that list. Go to http://www.fastwalkers.com/featured/featured.htm

Besides, it is fair to say that the USAF UFO files have been made public long time ago. I have had a list of the Unexplained UFO cases within the BlueBook files since 2005, and I find that this disclosure by Mr. Greenewald, Jr.  –who also is one of the participants in the “Fastwalkers” series, is just an advertising ruse to promote this DVDs business.

Last but not least, neither the RAF files, nor the GEIPAN files, or these American files provide something specific and conclusive about the UFO subject.  But it is important that government agencies keep no secrets about the UFO subject and make known all their files.

Are there any other interests behind all this operation of propaganda for the alien idea?

Maybe yes, and we are obliged to think about who are the possible beneficiaries of all this new round of extraterrestrial promotion. Who are those who can profit in their business making the people who could see something apparently unusual in the air think that what they are seeing is from outer space?

Think, and as some astute thinkers say: follow the money….

Consciously or unconsciously these people appearing in this DVD series are making a great favor to other people doing other kind of “business”, which --among other things-- demand clandestine flights.

When these flights are done, the best cover-up is “blame them to UFOs!”.

It is also evident that when famous investigators and students of the UFO subject in different countries have passed away, this generation in the middle, is looking to substitute them. They expect to take their place! But their approach is so blatant and rude that they will never reach their goal.

Fortunately, the real Ufology, the serious one, the one that works in the scientific line has nothing to do with this effort of entertainment which really does not deal with UFOs but with the alien myth and its commercial exploitation.

We look for the truth. We struggle to understand the Unusual Aerial Phenomena and their nature.

We do authentic Ufology.