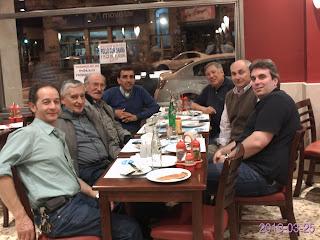 From midst of February to the end of March, I have been in Uruguay, visiting friends and family, and also colleagues in the UAP area.

As a result of this visit, the Uruguayan branch of the UAPSG had a very important meeting where two experts on the subject who have been members of CIOVI for 30 years, joined the Group.

While in Montevideo, I’ve found a business place that deals with many kinds of esoteric issues and alternative therapies. Among the services this people bring there are what they call “mystical trips” to some particular places.

Those places have been wrongfully associated with UAPs, and commercially exploited in what we consider an infamous trade with the credulity of certain people.

One of the things that caught my attention and shocked me was to know the prices for those trips.

They charge the equivalent to 674 US dollars to go to Capilla del Monte in Cordoba, Argentina, where there is the Uritorco hill, an “see” the so-called “intraterrain city of Erks” a myth created locally by one of the many swindlers that “guide” people ready to believe in whatever tale is told to them.

The other place of economic exploitation is the Father Pio place, across the La Aurora ranch, where since the seventies a myth have been developed about the presence of extraterrestrial ships, energetic vortices, etc.etc. The trip is short, it is within the Uruguayan territory and they charge 242 US dollars.

We think that authorities should put an end to this fraud.

AN INTERVIEW WITH A TEAM OF “THE HISTORY CHANNEL”

I thank Engr. Adolfo Gandín Ocampo who suggested my name to be included in a 10 chapter’s series prepared by the History Channel that is going to be broadcasted on TV stations throughout Latin America, starting on June, 2013.

I made a quick trip to Buenos Aires, from where I returned in the same day to Montevideo, and I was interviewed by Mr. Jorge Luis Suckdorf, in charge of the project.

We dealt with many issues related directly or indirectly with the UAPs, and as usual, I gave my pondered and sincere opinion about all of them.

Now we expect to see the series and verify where and how I will appear.

LECTURE AT A ROTARY CLUB 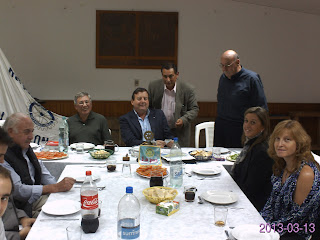 Kindly invited by the “Villa Colón Melilla” Rotary Club, (thanks to the efficient steps taken by our colleague Mr. Gonzalo Piano) I gave there a lecture about the Unusual Arial Phenomena investigation and study, with special reference to the UAPSG.

A very receptive attendance followed with real interest my exposition after which they pose good questions.

I want to thank warmly the President and members of that Rotary Club for such a fruitful meeting, and I wish them success in their endeavors.